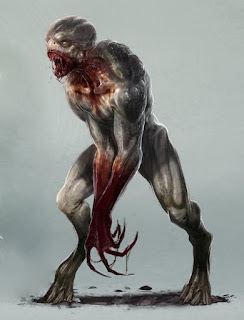 The Barbarez Clan
A faction in Krevborna

The Barbarez Clan are a family of ghasts and ghouls who serve Countess Alcesta von Karlok. All of their number are invariably mad; their thoughts are disordered, their urges are violent, and they cannot help but fixate upon their unquenchable hunger for human flesh. The Countess regards the Barbarez as her trump card; if she were ever truly pressed militarily, she would release the Barbarez upon her foes as a weapon of mass destruction. Until that day arrives, the Barbarez are kept locked inside their crypts beneath Castle Siebenhurst by order of the Countess.

Motto
We feast on flesh at the Countess’s pleasure.

Director's Commentary
The Barbarez were essentially born out of a thought experiment: how could Sawney Bean and his family be weaponized? Since Countess Alcesta is subtly besieged by vampire families who would like to take control of Lamashtu for themselves, she needed a trump card to play if anyone makes a serious play for her throne. Also, I like to use all the flavors of the undead, so I wanted a way to work ghouls in somewhere within Krevborna. Given that these ghouls and ghasts are basically ancient, flesh-hungry berserkers, they make a nice counterpoint to the more chivalrous Knights of Lilith that the Countess has at her disposal. The idea that they are kept locked in a dungeon until needed comes from Clive Barker's Cabal.