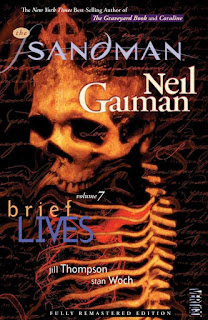 In Brief Lives, Dream is approached by his sister Delirium; she has been petitioning members of the Endless to help her find their lost brother, Destruction. Surprisingly, Dream agrees to help her on her quest. He doesn't do so altruistically; he acquiesces to her request mostly to forget that he was recently spurned by a lover.

Before Delirium asks Dream, she asked their sister Desire for aid. Desire's refusal is expected, but cruel. It's also unsurprising. Desire has been portrayed as cruel, petty, vindictive, and heartless throughout the series. (The irony of Desire's heartlessness is that it lives within a gigantic heart and the heart is its gallery sigil.) Desire is clearly set up to be one of the great villains of Sandman, a libidinal antagonist set against Dream's mopey ego-driven romanticism. Indeed, Dream is suspicious that Delirium's mania to find Destruction has been caused or inspired by Desire as some sort of trap. Desire swears a weighty oath that it isn't responsible for Delirium's fixation on uncovering the whereabouts of their errant brother, but what Dream expects is enough to color our perception of Desire's place in the narrative. Setting an early precedent, Gaiman tells us in The Dream House collection, "Desire is always cruel."

Each of the Endless hovers in the gray area between character and abstract concept. As such, the very idea of Desire seems tainted in Gaiman's story--if Desire-the-character is forever plotting and scheming for malignant ends, then it follows that desire-the-concept is a similarly corrosive motivating force. The correlation is odd, but informative. In reality, few of us think of desire as a pointedly negative thing. We believe that desire is powerful (1). We know that desire leads us toward pleasurable fulfillment (2). It's not even bad as a consolation prize (3).

But, if Desire/desire is more often damaging than not in Gaiman's fictive universe, surely Dream is established as the antithesis? No, Dream is a collaborative; the strife between Desire and Dream isn't due to their difference, it's caused by their congruence. What are dreams, after all, than manifestations of desire in the unconscious mind? Desires are ephemeral and fleeting, as are dreams. We wish each other "sweet dreams," and advise each other to "have a good time" in the company of others because we place a value on pleasure both solitary and communal. Both carry the connotation of aspiration--what do you desire, what do you dream of?

If Desire's flaw is an inherent streak of cruelty, consider that Dream is frequently guilty of the same error: his treatment of Nada and Orpheus evidence an abundance of that fault. The Sandman, then, is not really a tale about a clash between cosmic principles; it's about Dream's growth as a character through the purgation of cruelty from his own oneiric form of desire--a process only made possible by Desire's cruelty. This idea was threaded into the story early in the saga; Gaiman writes, in Dream Country, "But he did not understand the price. Mortals never do. They only see the prize, their heart's desire, their dream... But the price of getting what you want, is getting what you once wanted" (emphasis mine). As it turns out, mortals aren't the only ones who do not understand the price of this growth. Dream will pay the price for this newfound self-knowledge as well.

(1) - “Those who restrain desire do so because theirs is weak enough to be restrained.” ― William Blake, The Marriage of Heaven and Hell


(2) - In this moment, everything is suspended: time, law, prohibition: nothing is exhausted, nothing is wanted: all desires are abolished, for they seem definitively fulfilled... A moment of affirmation; for a certain time, though a finite one, a deranged interval, something has been successful: I have been fulfilled (all my desires abolished by the plenitude of their satisfaction).”
― Roland Barthes, A Lover's Discourse: Fragments

(3) - “Sex is the consolation you have when you can't have love”
― Gabriel Garcí­a Márquez, Memories of My Melancholy Whores
Posted by Jack Guignol at 11:39 PM