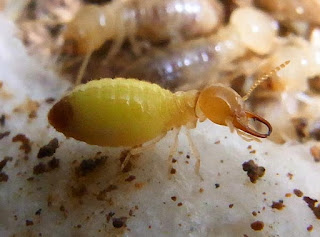 Wikipedia has this to say on the subject of autothysis:

Autothysis (from the Greek roots autos- αὐτός "self" and thysia θυσία "sacrifice") is the process where an animal destroys itself via an internal rupturing or explosion of an organ which ruptures the skin. The term was proposed by Maschwitz and Maschwitz in 1974 to describe the defensive mechanism of the carpenter ant (Camponotus saundersi). It is caused by a contraction of muscles around a large gland that leads to the gland wall breaking. Some termites (such as the soldiers of Globitermes sulphureus) release a sticky secretion by rupturing a gland near the skin of their neck, producing a tar baby effect in defense against ants. It is a form of suicidal altruism.

D&D tells us that there are a lot of giant versions of bugs around. Some of these bugs must be capable of autothysis.

We can make a trap out of this.

A clan of Krevbornite witches might keep giant termites chained up in their dungeons as a kind of biological defense system. Anyone who doesn’t smell of witchery who approaches one of these termites (or tries to pass by one to get down a corridor) sets it off; it ruptures into sticky goo that roots the hapless adventurer to the spot (saving throw pending, of course).

Perhaps the witches assume they will discover any adventurers held in this way in due time and use them as sacrifices to dark powers. Perhaps once an adventurer is stuck in place a secondary effect is triggered: descending ceiling spikes are a favorite, as are a flood of hungry fire ants unleashed in the vicinity.
Posted by Jack Guignol at 12:01 AM