Pyrads, the Keepers of the Flame 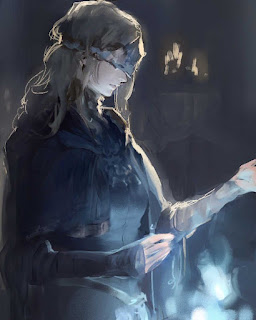 Pyrads are fey maidens who tend the sacred bonfires that are said to be the fey's source of endless rebirth and immortality. As long as such bonfires remain lit, the fey host will always return to soulless life after death. It is the duty of the pyrads to feed, nurture, and protect the bonfires to which they are bound.

A pyrad's demeanor changes with the season. In the spring and summer, they are wild and frivolous, dancing and frolicking amidst the flames of their bonfires. In the autumn and winter they grow solemn and vicious as the flames of their fires gutter and weaken.

Skills Perception +4, Stealth +5; Senses darkvision 60ft
Perception 14; languages Ignan, Sylvan; Challenge 2 (450 XP)
Innate Spellcasting. The pyrad's innate spellcasting ability is Charisma (spell save DC 14). The pyrad can innately cast the following spells, requiring no material components:
At will: produce flame
3/day each: faerie fire, thunderwave
1/day each: resistance, heat metal, flame blade
Magic Resistance. The pyrad has advantage on saving throws
against spells and other magical effects.
Speak with Beasts and Plants. The pyrad can communicate
with beasts and plants as if they shared a language.
Leaping Ember. Once on her turn, the pyrad can use 10 feet of her
movement to step magically into one bonfire within her
reach and emerge from a second bonfire within 60 feet of
the first fire, appearing in an unoccupied space within 5 feet of '
the second fire. Both bonfires must be large or bigger.
ACTIONS
Flame Blade. Melee Spell Attack: +6 to hit reach 5 ft., one target. Hit: 10 fire damage
Fey Charm. The pyrad targets one humanoid or beast that she
can see within 30 feet of her. If the target can see the pyrad, it
must succeed on a DC 14 Wisdom saving throw or be magically
charmed. The charmed creature regards the pyrad as a trusted
friend to be heeded and protected. Although the target isn't
under the pyrad's control, it takes the pyrad's requests or
actions in the most favorable way it can. 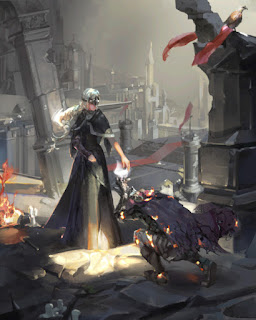 Each time the pyrad or its allies do anything harmful to the target, it can repeat the saving throw, ending the effect on itself on a success. Otherwise, the effect lasts 24 hours or until the pyrad dies, is on a different plane of existence from the target, or ends the effect as a bonus action. If a target 's saving throw is successful, the target is immune to the pyrad's Fey Charm for the next 24 hours.

The pyrad can have no more than one humanoid and up to three beasts charmed at a time.

Based on the dryad, obviously.
Posted by Jack Guignol at 12:02 AM