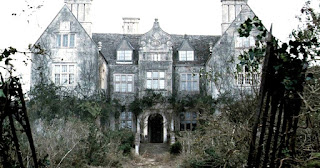 Here's a sketch I wrote years ago after watching The Woman in Black for the first time. I finally got to use it last night, and it worked very well.

The back-story: The Easterly House was a most unhappy home. Thaddeus Easterly and Susan Humphrey-Willis were joined through an arranged marriage, but it was a union destined to end in mutual loathing. Thaddeus was madly in love with another women, but his parents coveted the generous dowry attached to young Susan. For her part, Susan did not desire a husband or domestic life–she wanted to go to university, but was sacrificed on the marital altar by a family who cared far less about her dreams than they did about connecting their family line to the influential Easterlys.


The tragedy: After a solemn, joyless marriage ceremony, the new Mr and Mrs Easterly retired to a vast family home on the coast. The Easterlys must have fulfilled their conjugal duties as within a year a son, Nathaniel, was born to them. However, mysterious circumstances conspired to insure the family’s ruin: Nathaniel died on his tenth birthday and his mother was found hanged in the attic. Thaddeus began to appear in the village pub, complaining that his ancestral home was haunted by the ghosts of his son and wife; after his rantings became too severe, he was locked away in an asylum where he died a man broken in both body and mind.

The house: The house is an excuse to use all the trappings and conventions of a good haunted house tale in a game.

The spectral phenomena will start small but build the longer the characters stay within it. They will hear unexplained sounds emanating from the attic, they will catches glimpses of unnatural things in mirrors, objects will go missing only to re-appear in odd places, and strange chills will descend suddenly upon anyone straying too close to the family’s papers. The phenomena will culminate in two apparitions (one a woman dressed in mourning garb, the other a young boy) who peer at each other through the windows of the house: the mother from the balcony on which she was found and the son from the doorstep. If the characters interfere with certain things within the house, they will be attacked by Susan. If the characters interfere with certain things near the marsh, they will be attacked by Nathaniel.

The twist: There will be two layers of clues in the house. The more obvious layer of clues will reveal that young Nathaniel’s body is somewhere in the nearby marsh, but was never properly laid to rest. These clues will indicate a course of action: find the boy’s body (preserved by the boggy marsh) and bury it in the crypt that houses the remains of his heart-broken mother.

Following that first layer of clues is a potentially a mistake. The second layer of clues, which will be a bit more obscure, will reveal that Susan hated her child because he reminded her too much of the husband that was forced upon her. In fact, there will be signs that indicate that Susan drowned her son in the marsh with her own hands and was subsequently driven to suicide by his ghost. Following the logic of this second layer of clues will also presuppose a solution: one set of remains (either Susan’s or Nathaniel’s) must be desecrated to appease the other’s unquiet spirit. It will be up to the characters to discern which ghost poses the least threat and which is the more malevolent spirit in need of banishment.

Points of inspiration: The Woman in Black, Ringu, Shirley Jackson's The Haunting of Hill House.
Posted by Jack Guignol at 12:09 AM