It's fun to show the influences and inspirations that go into your world building, but often "Appendix N" posts don't give much in the way of context for how those influences and inspirations actually helped shape the setting. Sometimes they're essentially just lists of "things I like," which isn't too helpful either. Below are the primary inspirations for Krevborna; I'm going to take some time to explain what I stole what inspired me from each of my sources. 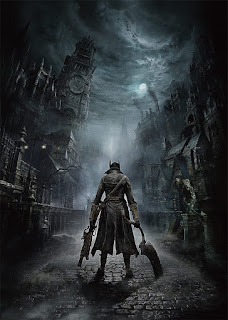 From Software, Bloodborne and the Dark Souls series
In the early days of working on Krevborna, I borrowed the most from Bloodborne. The paradigm of what the game is about--monster hunting--is ostensibly also the point of Krevborna; it's certainly what you have to do to level up your character in Krevborna. Bloodborne is all about monster hunting, but the way that different factions approach the war against monstrosity helped inform the various groups that players can interact with and join in my setting. Aesthetically, Bloodborne's mix of early modern, Victorian, and Gothic elements informed how Krevborna looks in my head--especially in regards to fashion. Bloodborne's Healing Church was also a direct inspiration for Krevborna's Church of Saintly Blood, and the idea of the Church taking the place of civic authority stemmed from From Software's game as well. The various saints detailed so far in Krevborna were somewhat inspired by the Dark Souls' Lords.
Similar Inspirations: Cristophe Gans's Brotherhood of the Wolf, Konami's Castlevania games, Hideyuki Kikuchi and Yoshitaki Amano's Vampire Hunter D light novels 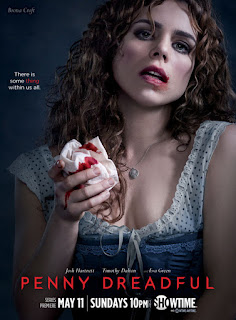 John Logan, Penny Dreadful
Bloodborne aside, Penny Dreadful was the next biggest influence on Krevborna. The most important thing that I learned from Penny Dreadful was a fearlessness and willingness to reinterpret classic Gothic conventions. Although Penny Dreadful uses Dracula, The Picture of Dorian Gray, The Strange Case of Doctor Jekyll and Mister Hyde, and Frankenstein as its source material, it isn't afraid to revise and update the ideas within the source material for its own ends. Similarly, there are a lot of ideas in Krevborna that are drawn from eighteenth and nineteenth century Gothic novels, but they've all been altered into something different within the context of a dark fantasy roleplaying game setting. Penny Dreadful's original ideas also helped shape some of the "mythos" underpinning Krevborna's horrors; the nature of demons and devils, the Wolves of the Holy Throne, and the prophecy of the Mater Monstrum are all things connected to the depiction of Vanessa Ives on the show.
Similar Inspirations: Alan Moore et al, The League of Extraordinary Gentlemen, Kim Newman's Anno Dracula series, Wizards of the Coast's Curse of Strahd 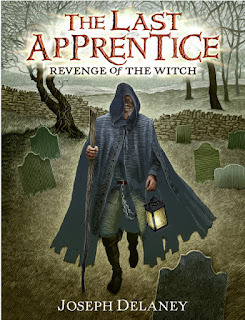 Joseph Delaney, The Last Apprentice series
The horrors that aren't explicitly "Gothic" in nature in Krevborna are instead inspired by folklore. Joseph Delaney's Last Apprentice books were definitely my model for how to combine monsters, haunts, and magic from folklore with the fantasy adventure genre. The way that witches are depicted in Delaney's books were especially influential on the witch-controlled down of Hemlock in Krevborna. Although the Last Apprentice books mostly reinterpret British folklore, the way that the folklore is integrated into the books was really helpful even where I was bringing influences from Russian and Eastern European folktales into Krevborna's cauldron of inspirations.
Similar Inspirations: Alexander Afanasyev's Russian Fairy Tales, CD Project Red's The Witcher series, Matteo Garrone's Tale of Tales, Emily Gerard's The Land Beyond the Forest 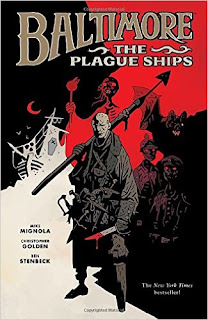 Mike Mignola et al, Baltimore and Hellboy
Mike Mignola's Baltimore and Hellboy are both comics that are essentially about monster hunting, which as I stated above is a central concern for characters in Krevborna; if you want to level up at a respectable pace, you've got to push back against the darkness and kill off the things that haunt the night. Lord Baltimore's mindset is also how I envision the hardened perspective of a Krevborna adventurer: horribly damaged by the experience, but fanatically devoted to the cause of destroying supernatural evil. Both Hellboy and Baltimore were also influential in the way I've been integrating classic monsters, folkloric monsters, and Lovecraftian monsters into the fabric of the setting.
Similar Inspirations: Brian Clemens's Captain Kronos--Vampire Hunter, Guillermo del Toro's Crimson Peak, Robert E. Howard's Solomon Kane stories, Wizards of the Coast's Innistrad setting 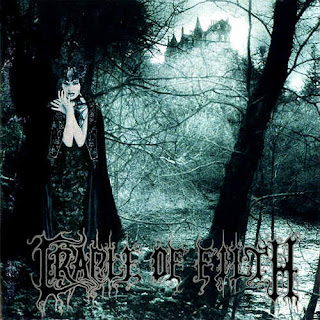 Cradle of Filth, Dusk and Her Embrace and Cruelty and the Beast
I listen to a lot of music while prepping to run adventures set in Krevborna. Cradle of Filth is over-the-top and impossible to take seriously--which is exactly why there are on this list. Cradle of Filth wed Gothic conventions to cacophony, which is a bit of fun. And underneath all the horror, misery, and tragedy, the Krevborna experience is supposed to be fun above all else. Dusk and Her Embrace and Cruelty and the Beast are two great, ridiculous albums that remind me that all the dark stuff should also be a bit cheeky and ultimately as enjoyable as a Hammer Horror flick.
Similar Inspirations: The Howling Void's Shadows Over the Cosmos, Myrkur's M, My Dying Bride's The Angel and the Dark River
Posted by Jack Guignol at 12:06 AM