Things that brought me delight in September, 2017... 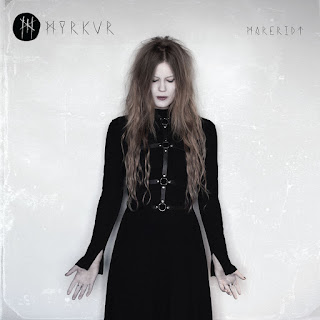 Myrkur, Mareridt
Mareridt adds even more Scandinavian folk into Myrkur's already potent errant black metal. You can listen to it on Bandcamp here. Der Weg Einer Freiheit, Finisterre
Finisterre rises above albums mired in tradition by embracing emotional tragedy. You can listen to it on Bandcamp here. 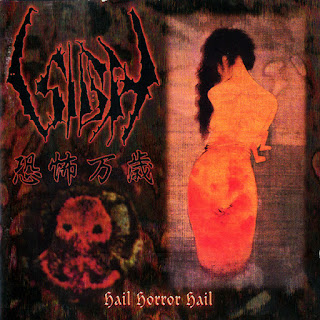 Sigh, Hail Horror Hail
Hail Horror Hail somehow escaped my revistation of Sigh's back catalog last month, which was a mistake as this one is the turning point that illustrates how an interesting Eastern take on extreme metal blossomed into its own irreproducible artistry. 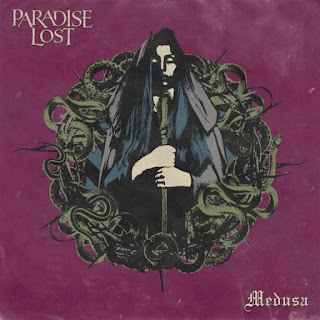 Paradise Lost, Medusa
The return of Paradise Lost continues to go from strength to strength. 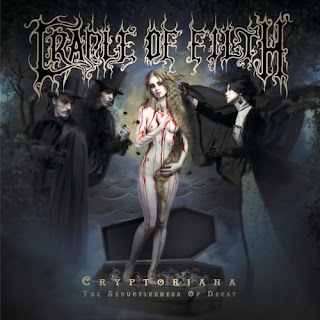 Cradle of Filth, Cryptoriana: The Seductiveness of Decay
Same song, but I like it; more Hammer Horror-inspired music from these lads. 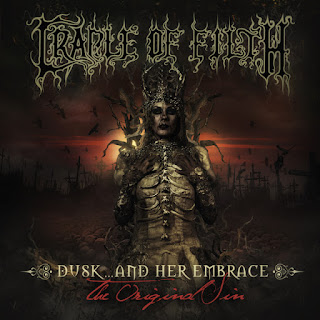 Cradle of Filth, Dusk...And Her Embrace: The Original Sin
This is basically an earlier, rougher version of the Dusk...And Her Embrace album that was released in 1996. The original is a classic to me, so it's interesting to hear what the "demo" version was like even if it isn't nearly as good as the more refined version. 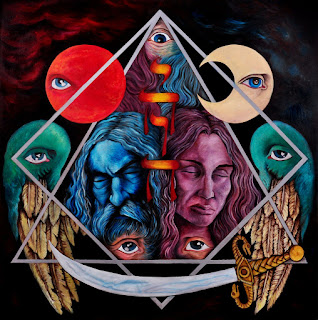 Riti Occulti, Tetragrammaton
Riti Occulti make occult doom metal...with traditional folk instruments. Must be heard to be believed. You can listen to it here on Bandcamp. 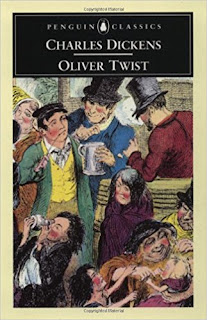 Charles Dickens, Oliver Twist
This time I was struck by the similarities between the groups assembled to fight the vampire in Dracula and thwart Fagin and Monks in Oliver Twist. You have the doctor (Van Helsing & Losberne), the learned man (Seward & Brownlow), the man of status (Holmwood & Maylie), the pure woman (Mina & Rose), and the gruff man with a heart of gold (Morris & Grimwig). Now that I think about it, Penny Dreadful does the antiheroic version of that archetypal "Victorian adventurer party": the doctor (Victor Frankenstein), the learned man (Ferdinand Lyle, then later Catriona Hartigan), the man of status (Sir Malcolm Murray), the pure woman (Vanessa Ives), and the gruff man with a heart of gold (Ethan Chandler). All of the them are allied against a corrupting "foreign" threat (Dracula, Fagin, Dracula again) marked with some of the stock characteristics of "Jewishness." 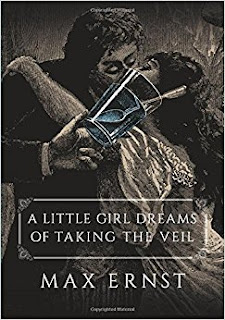 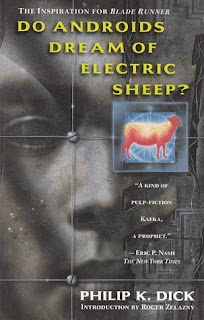 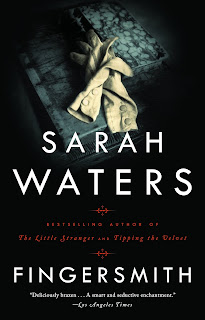 Sarah Waters, Fingersmith
I'd read this before, but every time I re-read it I marvel at the narrative construction. 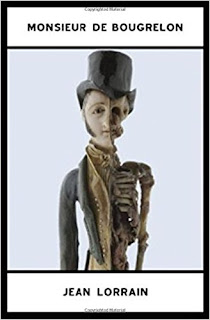 Jean Lorrain, Monseur de Bougrelon
A tour of Amsterdam given by a dandy's whose era has passed. 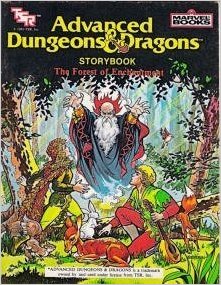 Bob Stein, The Forest of Enchantment
I had this as a kid and recently had a revelation: Bob Stine is the R. L. Stein of the Goosebumps series. I need to devote an entire post to the personal importance I attach to this book. 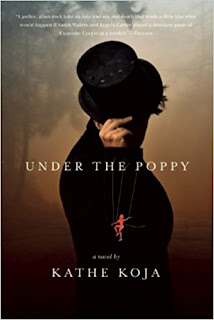 Kathe Koja, Under the Poppy
We did a podcast on this one, check it out. 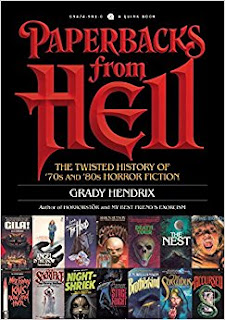 Grady Hendrix, Paperbacks from Hell
Thoughts on this one forthcoming on an episode of Bad Books for Bad People. 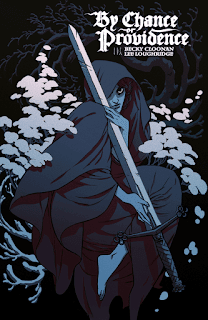 Becky Cloonan and Lee Loughridge, By Chance or Providence
Paul V. very generously sent me this in the mail, and now I am absolutely obsessed. Part medieval Gothic, part morbid fairytale...this is right up my alley and the art couldn't be more perfect. 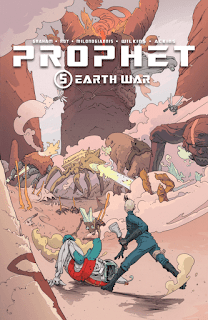 Graham, Roy, Milonogiannis, Wilkins, Ackins,
Prophet 5: Earth War
It was hard to imagine a solid ending that wrapped up this strange, meandering, and sprawling run of Prophet, but this works. 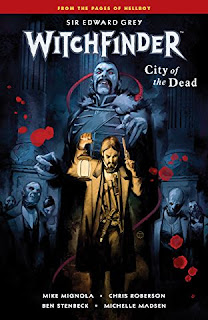 Mike Mignola, Chris Robertson, Ben Steinbeck, Michelle Madsen, Sir Edward Grey, Witchfinder: City of the Dead
Another solid installment of Witchfinder, this time with a clever twist on the notion of an army of the undead. Feels like it's setting up the pieces for a bigger story arc, but still quite fun. Definitely a series I would recommend to fans of Penny Dreadful. 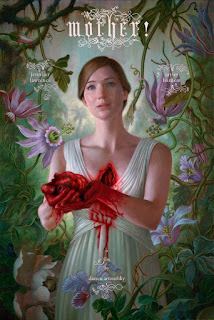 mother!
Anyone saying that mother! isn't a horror film isn't an introvert who lives in deathly fear of people "stopping by" uninvited. 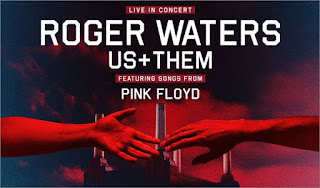 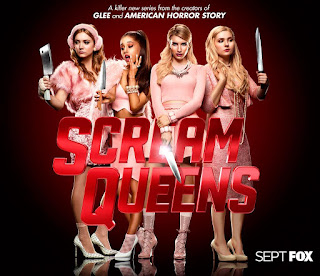 Scream Queens, Season One
And so begins the ramp-up to a horror-filled October. I can't believe how absurdly fun this show was. If you grew up, like me, enjoying the 80s horror parody Student Bodies, you should give Scream Queens a chance. 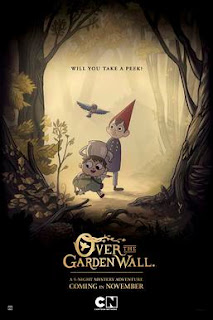 Over the Garden Wall
Just the right mix of fairy tale and folksy adventure. Not sure why it took my so long to get around to this one. The pumpkin-headed people were my favorite, obviously. 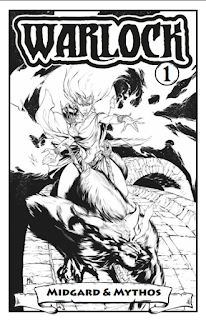 Warlock 1
Warlock is a new 5e 'zine for the Midgard setting from Kobold Press. It's Patreon-funded, and the first Patreon I've ever joined; first issue is pretty fun and usable, so I think I've make a good choice. The Patreon is here if you're interested. 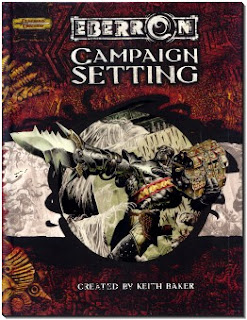 Eberron
Work continues apace on a Krevborna setting book, and part of my research for it has been to review the various formats that setting material gets delivered in. As part of that research I've been looking at Eberron books again. It really is a neat setting; love the way it takes the pulp basis of D&D in a different direction, but man, it is also a BIG setting that tries to be maybe a few too many things at once. 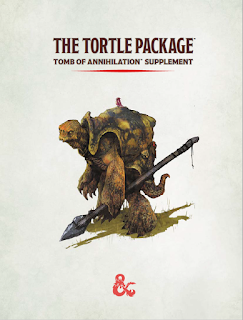 The Tortle Package
Torltes, for 5e!!! Adventure locations!!! For charity!!! 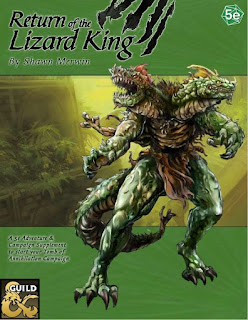 Various authors from the Adepts program
Return of the Lizard King, Ruins of Matolo, Cellar of Death, Ruins of Hisari, Beasts of Jungle Rot, Encounters in Port Nyanzaru, Heart of the Wild, Ruins of Mezro
Each of these is a tidy pdf to add additional content to the Tomb of Annihilation adventure. They're all really good, contributing adventures, monsters (more dinosaurs), races (lots of lizardmen and wilden), some new backgrounds and class options. This program definitely shows promise, and it's cool to see WotC spotlight the people doing good DIY work for the current D&D edition. 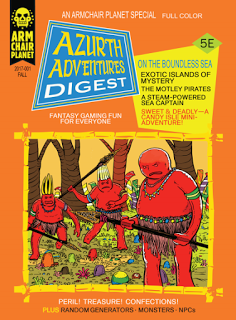 Azruth Adventures Digest
I talked about this right here. 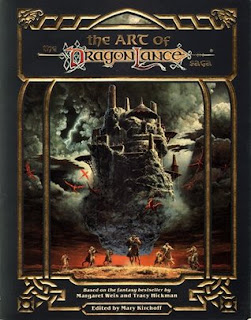 The Art of the Dragonlance Saga
The introduction to this book is a fascinating glimpse into how the sausage got made at TSR. Of course, the real draw is the art--which predictably has a nostalgic pull for me that the other vanilla fantasy D&D settings do not. Even so, it's interesting to note the variety of styles that were used to depict the characters in the Dragonlance saga; yeah, most of it looks the way Stevie Nicks sounds, but there are several pieces in here that are downright Conan-esque in approach.