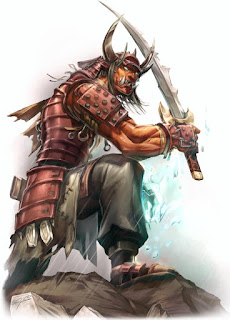 UNDER THE DEMON SUN
The forthcoming book Under the Demon Sun: The Warlords of Cinderheim details the Cinderheim Reaches, a large desert on the wild continent of Hygaea. An unrelenting sun beats down on the arid dunes of Cinderheim, making it the hottest place in the world during the brutal summer months. Despite being a largely barren wasteland, the desert has become a dangerous refuge for outcasts, barbarians, the desperate, and the depraved.

The population of Cinderheim centers around seven oases within the desert that provide potable water and stable agricultural production. Each oasis is under the control of a warlord and their band of warriors. Life under the aegis of a desert warlord sometimes approaches serfdom for the people of Cinderheim, but each warlord provides protection and a degree of security. All seven oases boast permanent encampments that create a microcosm of civilization within the desert wastes—life within the fortified walls of an oasis encampment is the safest bet for the people who live within the Cinderheim Reaches.

This is one of the seven warlords, as selected for this preview by the good people of Google+:

The Prince of Pleasure
Niu Bo Wei is a sybarite and hedonist; he does not care for the responsibilities that leading the Thanorek encampment imposes on him, but he does enjoy the pleasures that his position allows. Niu Bo Wei maintains power mostly through his intense charisma and charming decadence—he sees his encampment as the indispensable desert bagnio where all are welcome and where all appetites are satisfied.

THANOREK Thanorek is the least powerful encampment in terms of its ability to wage war, but it provides a useful outlet for the Cinderheim Reaches—it is widely regarded as a place of pleasure and excess where successful raiders can purchase all manner of intoxicants and carnal experiences.

Here's what the entries for Niu Bo Wei and Thanorek will look like in the print version of Under the Demon Sun: 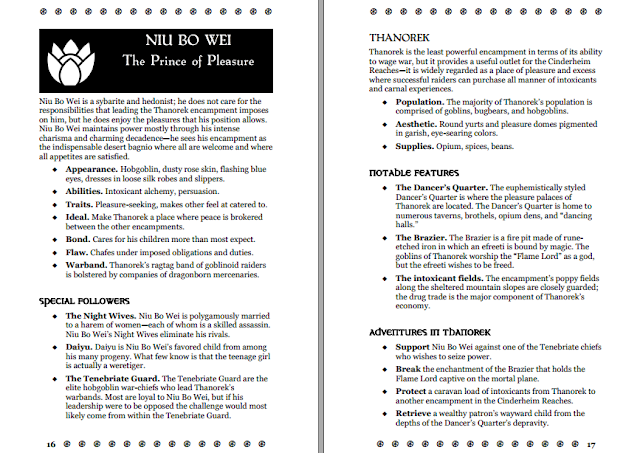