The Goddesses of the Covenant 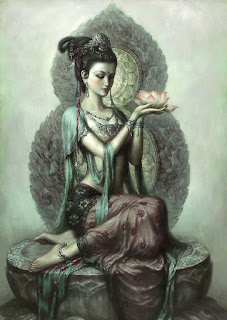 D&D's baked-in ideas about gods are derived from an assumed "points of light amid the wilderness" setting and the need to fulfill basic fantasy archetypes. Which means that a lot of D&D deities aren't particularly well suited to a modernizing fantasy city that owes more to Weimar Berlin than it does Waterdeep.

However, we can probably come up with something that works by thinking about what ideals the citizens of a city value and how to bend the usual fantastical divinities toward life in the metropolis. Working off the ideas posted here about a syncretic pantheon of borrowed deities that has evolved over time through processes of cultural adaptation, here are the goddesses of the People's Covenant in Umberwell:

THE GODDESSES OF THE COVENANT


In the distant past, Eska was likely a deity associated with a particular homeland or nation, but she has come to represent the idea of a community woven together from disparate strands.

Komoa, goddess of commerce
Formerly a fearsome goddess of storm and sea, Komoa has evolved into the goddess of travel and commerce. Travelers, merchants, and those who ship goods by air and water make offerings to Komoa for luck and prosperity.

Orthea, goddess of progress
Orthea was once a goddess associated with the preservation of ancient lore, but her duties have expanded to include modern applications of knowledge such as industry, science, and magitek.

Ravsana, goddess of pleasure
As the goddess of pleasure, Ravsana holds dominion over a varied array of gratifications: intoxication, love, art, the city’s entertainments, and the beauty of nature. Ravsana is also venerated by gamblers, thieves, and criminals whose livelihoods are connected to vice.

Verasti, goddess of justice
Once a goddess of bloody war and conquest, Verasti’s ethos of imposing order by force has been adapted to notions of civilized justice and lawful judgment in Umberwell.
Vokara, goddess of danger
Vokara is a goddess prayed to out of fear rather than devotion; she represents a multitude of dangers that the citizens of Umberwell wish to keep at bay, such as random acts of violence, disease, accident, and untimely death.
***

It's a common trope of fantasy religions to have the gods be "powered" by the faith of their followers. I think there is potential in going further with this: what if the gods' personalities are shaped by the needs of their followers as well?For example: the bloodthirsty war god of a conquering horde might well be chaotic evil...until they settle down in their hard-won lands, start laying down roots, and turn their swords into plowshares. Those settled people are turning toward the law of civilization, so maybe their god moves along with them...ending up somewhere on the lawful spectrum and emerging as a god of justice or protection.Undoubtedly this idea has been explored before, but I wanted to put a pin in it here for future reference.
Posted by Jack Guignol at 12:01 AM