The Cult Leader and the Bartender

Two supporting cast characters in Umberwell: The Cult leader and the bartender 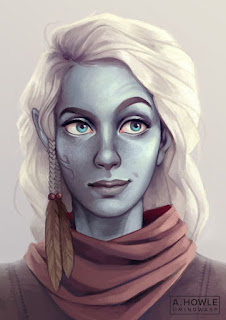 Melora Rime acquired her hatred of the world as a detainee confined to a prison camp in cold, mountainous land. After her escape, she learned to harness the power of the wild, eventually using that power to take control of the apocalyptic Children of Fimbul cult.
Occupation. Cult leader.
Appearance. Windsoul, ice blue skin, short white hair, dresses in furs, whip scars on back.
Abilities. Druidic magic, wilderness survival.
Traits. Willful, will never be taken alive.
Ideal. To become a monstrous being of ice and wind.
Bond. Feels kinship with the oppressed.
Flaw. She controls her emotions to an extent that works against her aims. 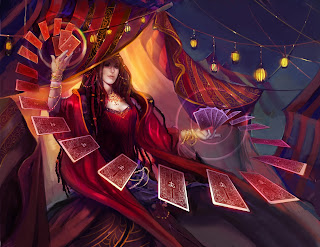 Wick is a bartender at the Bullroarer, a tavern and sauna frequented by picaros and crypt-kickers. As someone whose job entails being a sympathetic ear as much as it does pouring drinks, Wick knows a little something about the personal lives of the Bullroarer’s clientele.
Occupation. Bartender.
Appearance. Succubus, heavily tattooed, flame-red hair kept in dreadlocks, dresses in very little, athletic build.
Abilities. Mixology, good listener, empathy, fortune telling.
Traits. Energetic, sarcastic.
Ideal. Buy the Bullroarer from its mysterious owner.
Bond. She makes sure that adventurers who are down on their luck get a warm meal and a stiff drink.
Flaw. Falls for a pretty face, every time.