The Role of Adventurers in Umberwell 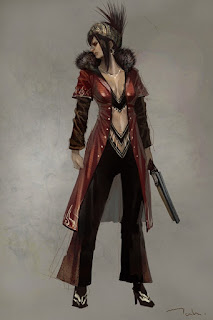 My favorite campaign structure for games set in Umberwell is an open table of adventurers for hire—each player creates a down-on-their-luck character looking for work and out to achieve wealth and infamy in the city. Whoever shows up to a session plays their part. To further their reputations as adventurers and bolster their coffers, player characters in Umberwell routinely engage in unlawful enterprises, protect their neighborhoods, fend off predatory gangs and less scrupulous adventurers, and keep clear of entanglements with authority.


The mindset of a resident of Umberwell can be stark or bleak. Adventurers profit from misery because misery reeks of opportunity to make coin when things have gone horribly sideways. The city’s citizens are vulnerable prey in a metropolis filthy with predators; they suffer when they feed their addictions and when they’re offered false salvation. Credible threats of violence are a functional insurance policy that keeps the city’s machine in motion. When your moral compass points only to the downward spiral, damnation feels like a foregone conclusion.

However, the adventurers created by the players might be a strategic intervention into the black beating heart of the city. Adventurers represent a line of flight away from authority and the depredations of misery. A literally violent break occurs here: an adventurer’s purpose is to disrupt, to tip the balance, to right wrongs—even if only by accident or because there was money in the chase. Adventurers are a fraught crack in the city’s ecosystem because a continual, nomadic becoming-picaresque is a process that veers dangerously toward re-assemblage within the metropolis's appropriated war machine.
Posted by Jack Guignol at 12:00 AM