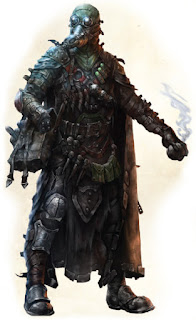 Umberwell is a city of contagion...

NECROPHAGOUS FEVER
Umberwell is plagued by outbreaks of disease; some areas of the city are perpetually quarantined. Necrophagous Fever, for example, causes an elevated temperature, rasping cough, cadaverous appearance, and skin discoloration, until the progress of the disease leads to eventual transformation into a mindless zombie that hungers to kill the living and devour their flesh. Patent medicines of varying efficacy, such as Korokov's Blood Tonic and Paolo's Venerable Elixir, are sold throughout Umberwell to treat the Fever and a multitude of other complaints. The superstitious wear scrimshaw charms in hopes of staving off infection.

Shout outs to Paolo Greco of Lost Pages; Paolo's Venerable Elixir is so named in tribute.
Posted by Jack Guignol at 12:01 AM