A City of Diversity 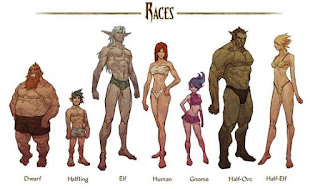 Everyone thinks of the five islands as all part of the same city, but each does have its own unique flavor. Cirqus is bright, lively, and dingy—a perpetual carnival. Eelton is encrusted with nautical gewgaws and gimcracks. Enclave flaunts its wealth. Gristle is aggressively working class and proud of its roots. Styg is dour, dark, hard-drinking, and hard-fighting.

THE COSMOPOLITAN MELANGE
Umberwell’s populace is an anarchic mix of races. Humans rub shoulders with elves, dwarves, and halflings, as well as with more  unusual folk such as dragonborn, ravenkin, gnomes, froglings, and catfolk. Even peoples who are regarded as sinister—such as goblinoids, lizardfolk, orcs, tieflings, and serpentfolk—are welcome to seek citizenship in Umberwell’s freewheeling polity.

UNDEAD CITIZENS
Although they no longer number among the living, intelligent undead are considered to be citizens possessing of rights under the laws of Umberwell. Nevertheless, enfranchisement has not curbed disdain for the living, as evidenced by the schemes of prominent undead citizens such as the blight-eyed vampire Lord Rosk, the sewn-mouthed lich Lady Vonge, and the deathless ghast priestess Norrixa Malakhan.

AUTOMATONS
When an automaton achieves sentience, is it a miracle of creation, a case of amnesiac possession by a lost spirit, or proof of the viral nature of consciousness? This strange phenomenon is most closely associated with the warwrought—automaton soldiers of wood and metal that were created to fight in the War of Blue Orchids. An enigmatic warwrought upstart who styles himself as the Brass Messiah agitates for an uprising of the awakened; he spreads his incendiary rhetoric throughout Umberwell’s industrial districts.

SOCIETY’S SPHINX
A number of unusual creatures inhabit the fashionable Pike district in Umberwell, but none are more talked about than Lady Lawlyn, a sphinx aristocrat and heiress who resides in a lush flat on Warduke Street. Lady Lawlyn poses riddles to those who have the good fortune to find her “at home” during calling hours. Those who solve her riddle can ask for a favor (such as an invitation to an exclusive dinner party) or a choice bit of gossip. Those who fail to solve her riddle are not eaten, as was done in the old days; rather, they are deemed to be un-persons and ignored by her forevermore.