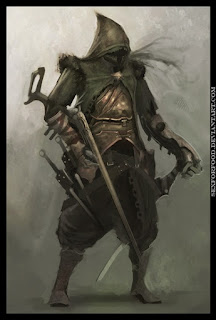 The Scourge: A Faction in Umberwell

THE SCOURGE
The Scourge is a loosely affiliated league of vigilantes who take to the streets to assassinate violent or abusive criminals. To become a member of the Scourge, a person must have suffered a great wrong at the hands of a miscreant; the Scourge is united through their mutual experience of loss, although most members of the group keep their identities secret—even to other members of the faction. When members of the Scourge hunt criminals they often don dark cloaks and theatrical masks. They take great pains to conceal their names, often adopting pseudonyms designed to strike fear into the villains they seek vengeance against.

Motto
Justice is a blade that falls without mercy.

Easter egg: The Scourge was inspired by Michael Gibbons's love of superhero comics.
Posted by Jack Guignol at 12:00 AM