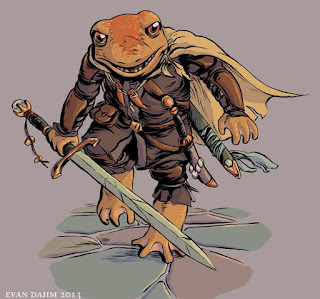 FROGLINGS
The amphibious froglings often to live and work near Umberwell's docks or rivers because they need to immerse themselves in water daily. Due to their small size, froglings rarely find work as dock hands or stevedores, but their natural alertness and the paralyzing toxin secreted from their skins makes them ideal guards for ships with precious cargo docked at Umberwell's many wharves.

GITH
The uniformed view the gith are a single people, but those with a deeper understanding of their history know that they are a people divided. The strand of gith who hail from nations built atop dead gods in the Astral Sea are warlike and fascinated by necromancy; these gith brought veil dancing clubs where the performers are reanimated corpses to the nightlife of Umberwell. The other strand, who emigrated from an obscure lower plane, are contemplative—but not pacifistic; these gith have established many monasteries and dojos throughout Umberwell where a variety of martial arts are taught. 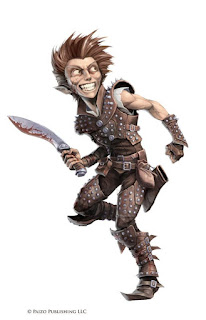 GNOMES
Gnomes typically arrive in Umberwell seeking to join the Libris Rex or the Ethergram Cooperative. Gnomes tend to be studious and regard the language of their people as the best scholarly lexicon for encoding and preserving histories and scientific knowledge; many gnome academics refuse to write in anything else but gnomish. 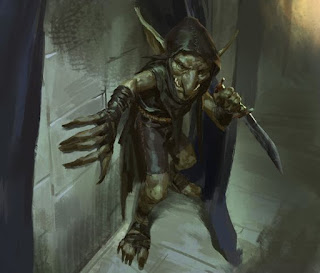 GOBLINS, BUGBEARS, AND HOBGOBLINS
Due to the hierarchical norms passed down in goblinoid culture, goblins, bugbears, and hobgoblins excel in the urban hustle—the possibility of climbing the ladder of social and economic power in Umberwell gives them something aspirational to strive for.
Posted by Jack Guignol at 12:08 AM