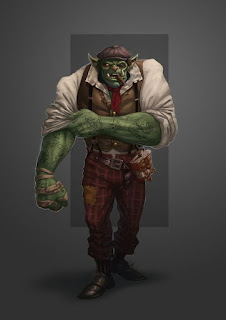 ORCS
Orcs are particularly sensitive to their environment. Though orcs living in the wildlands tend toward brutishness and barbarism, the orcs who have settled in Umberwell as laborers find themselves evolving a peculiar class consciousness and political unity as downtrodden workers that would be impossible anywhere else but Umberwell. A few of the city’s more controlling factions have attempted to sway the orcish population into service as shock troops enforcing order, but the influence of the city has largely resulted in orcs who value communistic ideologies and proletarian revolution over conservatism. 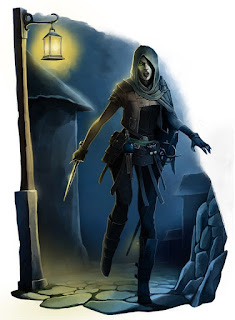 SERPENTFOLK
The sinister serpentfolk are accepted in Umberwell society, albeit uncomfortably and with great suspicion. Serpentfolk claim to originate from a hidden homeland in the west called the Grisgris Khanate, ans some fearful citizens of Umberwell wonder if the serpentfolk who have settled in the city are spies eyeing Umberwell with subjugation in mind. 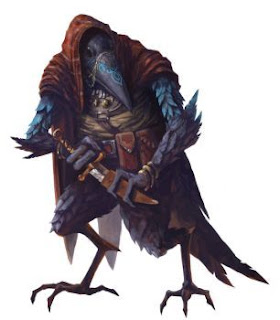 RAVENFOLK
Ravenfolk are the descendants of Covenant missionaries who ventured into spiritually contaminated lands, believing that they could cure them of arcane corruption. Those missionaries were irrevocably changed by a metamorphic curse, and their progeny still bear the mark of that encounter in their bipedal, raven-like forms. Ravenfolk are mostly vagabonds and wanderers; many possess mystical inclinations, but an equal number are simply charlatans and grifters.
Posted by Jack Guignol at 12:05 AM