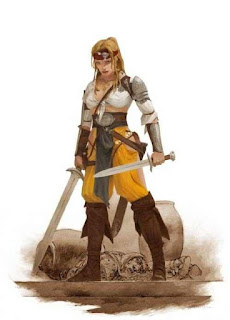 Hey, look, new errata is out for all three core 5e D&D books!

Aside from some minor--but needed--tweaks to the beastmaster ranger (1), the errata looks like piddly stuff and clarifications so don't go in expecting to be blown away by some bold new design choices.

When it comes to errata and redesigns, I think everyone has their particular hobby horses. Personally, I would have made a few more daring changes (2), but I understand why they want to avoid turning the errata documents in a 5.5 version of the game.

Even so, I know what my big change would have been: two-weapon fighting. Here's what it would look like in my errata:

If either weapon has the thrown property, you can throw the weapon, instead of making a melee attack with it.

What's changed? Attacking with your other hand no longer costs a bonus action; instead, if you meet the requirements, that additional attack is folded into the Attack action itself.

Why make this change? The two classes designed and themed around two-weapon fighting, the ranger and the rogue, are actively disincentived from using two weapons because of the action economy. Rangers and rogues have too many things competing for their one bonus action per turn. In the best case scenario that would lead to interesting choices for the player to make, but in practice it feels like two-weapon fighting and the classes who need bonus actions to do their thing were designed by separate people on the 5e team.

Does it break anything? I started accidentally using the above revision of the two-weapon fighting rules when I simply forgot that the additional attack needs a bonus action, and so far nothing's felt noticeably broken. Maybe it's a little more powerful in the early levels because it gives you an extra (though less damaging) attack before 5th level, but it seems ok.

(1) - None of this will "fix" the ranger for people who don't like the class's design, of course. To be honest, the worst part about the ranger is that it has a deadly boring 1st level. Who thought it would be a good idea to front-load the class with two "ribbon" abilities?

(2) - Design changes I would make, that just so happen to look exactly like my house rules:


(3) - At 1st level, I estimate that the difference in damage between a fighter with the great weapon style and the two-weapon fighting style to be about two points--hardly game-breaking--and once 5th level extra attacks come into play, things move toward great weapon fighting gaining an almost three-point lead. Again, hardly game-breaking.
Posted by Jack Guignol at 12:00 AM