The Wind, The 13th Floor, The Rat, Ruthless Gods, and More

Things that brought me delight in June, 2020: 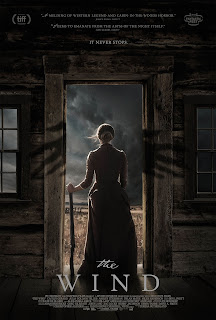 Calling The Wind an example of the Horror Western genre does it a disservice; that notion raises expectations of haunted gunslingers and the like--expectations that The Wind won't satisfy. Instead, The Wind focuses on the domestic horror of westward expansion. The landscape is pitiless. The menfolk are stoic and emotionally mute--when they are present at all. The women are burdened by what they've left behind, what they've brought with them, and by the life they've found at the forsaken ends of the frontier. Add an unhealthy dose of paranoia to the already heady mix of isolation, brutality, and hubris, and things are bound to unravel in hideous ways. 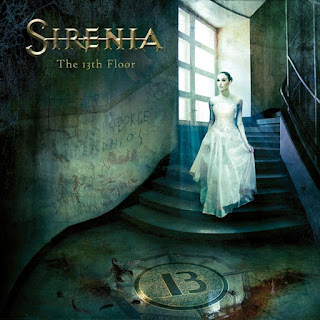 Sirenia,
The 13th Floor
Sirenia's The 13th Floor was a controversial album when it was released. The expectation was that every Sirenia album would feature the talents of a different vocalist, but The 13th Floor was the beginning of Ailyn's tenure with the band. Although opinion was divided at the time, I find the album hard to fault. Morten Veland's project has always delivered strong Gothic metal statements; though there is somewhat of a pop direction on The 13th Floor, it is tempered by the use of choir, orchestration, and the occasional "beauty and the beast" moment. My favorite tracks on the album are the ones I never hear anyone mention; give "The Mind Maelstrom" or "Beyond's Life Scenery" a try if you want a taste of Sirenia's best material from this period. 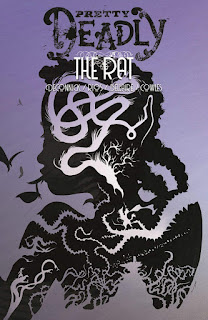 DeConnick, Rios, Bellaire, and Cowles,
Pretty Deadly: The Rat
Whereas the first two volumes of Pretty Deadly explored the narrative space of Westerns and war stories, The Rat stakes a claim as a modern take on noir. Frank, a Conjure Man, summons Deathface Ginny to help him solve the mystery of his niece's death. This mythopoetic version of the detective story plunges the unlikely pair into conflict with stray reapers--agents of Death who have not yet come back to the fold now that Sissy has assumed the mantle. They must also navigate the illusions of early Hollywood and learn to separate the authentic story from its falsified ending. 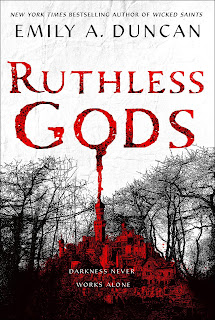 Emily A. Duncan,
Ruthless Gods
More grasping of problematic lovers by the chin to direct their gaze! More tracing of fingers across cheekbones! Now with added feet up on the furniture in a really insouciant way! All jokes aside, I enjoyed Ruthless Gods but this series has lost me a bit. There's a too much mounting inconstancy, as if the author really doesn't know where her story is going or what actually motivates her characters; for example, a character who has dueling-yet-incompatible desires can be interesting, but if they pursue a course of action wholeheartedly only to change horses mid-stride it just makes them feel flighty instead of conflicted. Similarly, characters just show up or bugger off as needed. (No less than four heirs or current rulers of kingdoms end up in the same place and the same time.) Oddly, the series has become a pretty strong argument for why teenagers should never be regarded as the most important people in the world: if the main characters here are any indication it would be all snark, all petulance, all pointing knives at each other, and all toxic relationships all the way down. 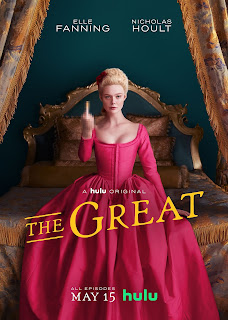 The Great
If you're looking for historical accuracy, keep moving. Although The Great is based on Catherine the Great's coup against her husband Peter, this dark, bawdy take on Russian succession does not care at all about the historical record. There's a great deal of cruelty and absurd moments in this show, but they're sweetened by exquisite comedic timing. One thing I really enjoyed about The Great is that it doesn't turn Catherine into another example in a long line of an increasingly grating archetype: the earnest white lady whose idealism, braininess, and type-a organizational fetish is really just a cover for controlling the lives of the less well-positioned. This Catherine is an idealist, but she's also naive, stumbling, and fairly deeply flawed. And yet we can still want to see her succeed because she's simply less flawed than everyone else in the pointlessly extravagant Russian court. 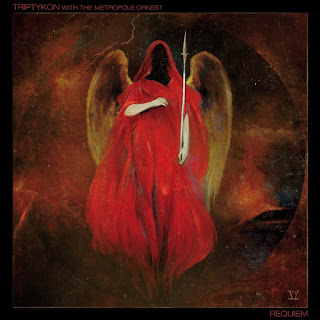 Triptykon with the Metropole Orkest,
Requiem
I'm usually not a big fan of live albums. But every once in a while a live album comes along that captures a unique, primal moment. Requiem is of that latter type. Pairing Triptykon's experimental Gothic doom with a full orchestra is an obvious winning move, but Requiem feels as tightly conceived and cohesive as any strategically constructed studio recording could ever hope to be. 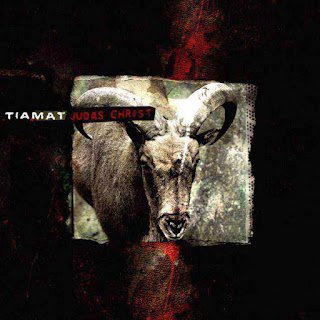 Tiamat,
Judas Christ and Skeleton Skeletron
Skeleton Skeletron and Judas Christ mark Tiamat's exit from the goth rock sound they adopted on A Deeper Kind of Slumber. As such, they're at the heavier end of Tiamat's Sisters of Mercy worship. These are probably the easiest Tiamat albums to listen to; certainly, they are the least demanding. Though in some quarters that breezy cover of "Sympathy for the Devil" might be unforgivable. 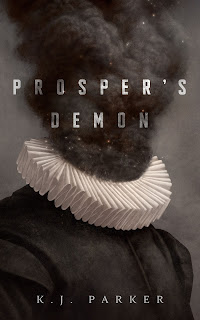 K. J. Parker,
Prosper's Demon
I've really been enjoying the novellas that Tor has been publishing. Prosper's Demon concerns an amoral exorcist, the artistic and philosophical genius of the age, a demon-inhabited infant prince, and a large bronze statue of a horse. Of course, I'm a mark for these sly little tales that muse on the power of art and the meaning of sacrifice, but this is a particularly cunning and cruel example of the form. This is the perfect book to read in a day after you've just finished something long and feel the need to catch your breath before pressing on with another lengthy read. It was just long enough to stick the knife in and let the pain linger a bit before the end. 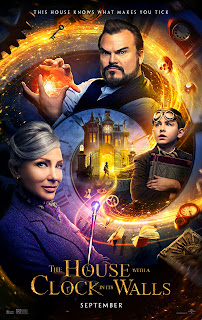 The House with a Clock in its Walls
The House with a Clock in its Walls has a lot weighing against it. For one, it's directed by Eli Roth, whom I am not usually a fan of--which was especially true after viewing Green Hell. Second, it has Jack Black in it, whom I usually try to avoid. And yet, against the odds, I thought this was a fun movie. Not mind-blowing, not an instant classic, but a solid little movie about a kid thrust into a world of horror and magic. There's a good bit of scatological humor, and I couldn't figure out if it was there because hey, Eli Roth, or because that's just what kids find funny. Additionally, I defy you to find a more surreal image this side of Eraserhead than Jack Black's adult head on the body of a urinating baby. 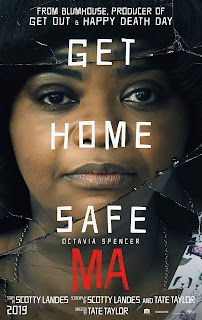 Ma
For a while, the trailer for Ma was inescapable at the theater. And honestly, it didn't seem to bode well. Teens stalked by the unhinged older woman who lets them party at her house because she's dangerously lonely is a decent premise, but it had the real potential to be a by-the-numbers thriller. Somewhat surprisingly, Ma is a pretty tight little horror film that plays with deeper traumas and the desire to visit revenge on the more vulnerable descendants of the people who harmed you. It's unusually lurid in places for a Blumhouse production; at times it even has a light V. C. Andrews flavor to it. And it deserves credit for featuring teen characters who actually look like teenagers. 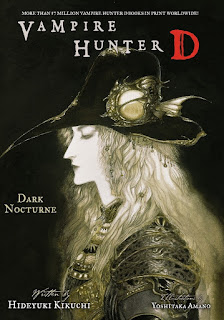 Hideyuki Kikuchi,
Vampire Hunter D: Dark Nocturne
Unlike the other volumes in the Vampire Hunter D series, Dark Nocturne is a collection of novellas instead of a self-contained novel. One novella concerns a haunting vampiric song, another is about an artificial world that harbors a vampire until blood lust overtakes it, and the third pits two sentient weapons of war against each other in a needless, predetermined conflict. I wasn't expecting an overarching theme to be running throughout the three stories in Dark Nocturne--well, other than "D is hot"--but the novellas in this volume all testify to the horrible ends of the vampire Nobility's scientific acumen. 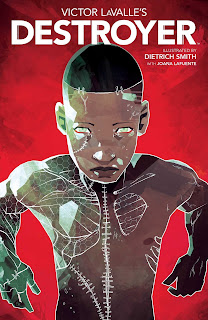 Victor LaValle, Dietrich Smith, Joana Lafuente,
Destroyer
A Frankenstein for the current moment--so much so that it could be a little painful to read in places. Extrapolating the often under-explored context of why Victor Frankenstein gave life to his creature--the persistent weight of grief--Destroyer focuses on how black lives and black bodies are treated as disposable and the pain of having to grapple with how ingrained that disposability is in our culture. The question becomes--how do you respond to the grief that inevitably must follow from that? Although this ends on a hopeful note, this is not escapism.