The Wych Elm, Master of Dark Shadows, Oceans of Slumber, and More

Things that brought me delight in September, 2020: 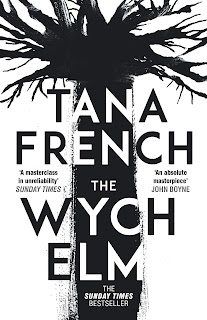 After a night out celebrating after the resolution of a major office snafu, Toby Hennessy is attacked in his flat and left with a traumatic brain injury. As they so often do in life, the hits keep coming for Toby; he finds out that his beloved uncle Hugo has a terminal brain tumor. Toby moves into the Ivy House, Hugo's home and the "family house" that hosts all the Hennessy's gatherings, ostensibly to take care of Hugo, but also because it's a quiet place to recover from his own ptsd after being assaulted.

Things settle into a comfortable routine until a skeleton is discovered secreted inside the wych elm that dominates the backyard. The remains belong to someone Toby and his cousins knew back in school, but whose disappearance had long been considered a suicide. Toby's fractured mind reels at the possibilities. Is one of his cousins the killer? Is uncle Hugo responsible? Is he himself the murderer?

With his mind in disarray, Toby leaps from one conjecture to another, never able to fully grasp the complex world around him that he never had to notice. Toby's explanation of the events that unfold around him veer from thoughtful, oblivious, and at the novel's most tense moments, nervy and neurotic. He isn't just an unreliable narrator; he's the rare narrator who knows he's unreliable. Most interestingly, this newfound unreliability forces Toby to grapple with a truth he had never before been confronted with: his privilege as an attractive straight white male from a good family has insulated him from experiences he had easily been able to turn a blind eye toward. Dealing with trauma is new to Toby; imagine his horror at realizing that the world he's lived in has been defined trauma he never had to see. 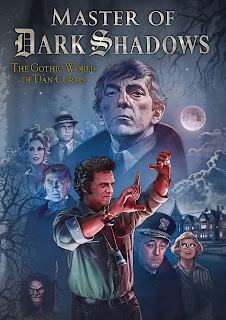 Master of Dark Shadows is a documentary film about Dan Curtis that focuses on the history of Dark Shadows, the Gothic soap opera that ran from 1966-1971. As a longtime Dark Shadows fan, there wasn't a ton of new information here for me, but the interviews with the cast and crew were great and the film paints a sweet overall picture. To be honest, I always forget that Dan Curtis helmed two epic, award-winning war series; to me, he'll always be the "Dark Shadows" guy--which would have been to his chagrin. But hey, if you're going to have a legacy of any kind, hard to beat the enduring love people have for Dark Shadows. 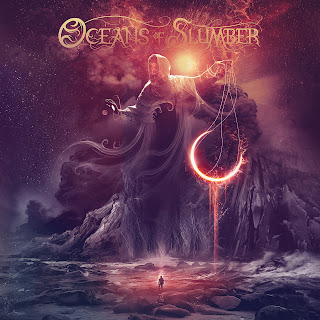 Oceans of Slumber's new self-titled album, which is actually their fourth album, is an incredibly dense listen, but that density isn't about monolithic sludge or claustrophobia. The album is complex and multifaceted; intricate progressive acoustic guitar lines give way to doom-laden riffs and sea changes in tone and atmosphere. The record is aggressive, tapping into death metal's deep well of anger, but it also possesses a raw beauty seldom found on a metal release. Much of that beauty is due to vocalist Cammie Gilbert, whose voice is one of the strongest, most varied, and most siren-like deliveries in metal today. 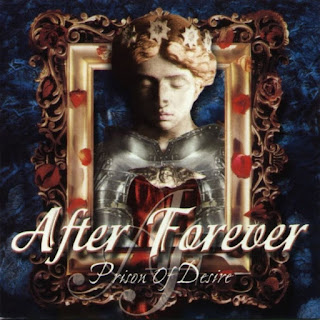 With Nightwish's recently released Human. :||: .Nature still in heavy rotation, it felt appropriate to go back through After Forever's (current Nightwish singer Floor Jansen's first major band) back catalog. And what a trove of delights it is! Gothic metal gets one of its essential blueprints from After Forever's discography; although they didn't invent the notion of pairing classic instrumentation with beautiful feminine vocals and growling masculine vocals, they way they brought the whole package together with operatic deftness surely set a tone that was widely emulated. 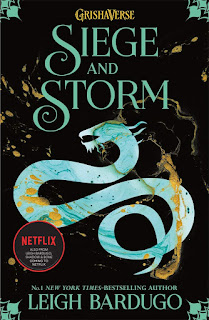 After the events of Shadow and Bone, Mal and Alina are on the run, desperately trying to find their way to a life not haunted by the Darkling. But an easy egress is not to be had; they find themselves drawn back to Ravka because Alina comes to feel that her newfound power may be the only thing that can protect the nation and stop the Darkling's plan of usurpation. In a sense, she chooses to be haunted--in a somewhat literal way, at points--over having her own life. And yet, the sacrifices that Alina makes often don't seem worthwhile. Ravka is a terrible place, full of terrible people, but I suppose it is home. 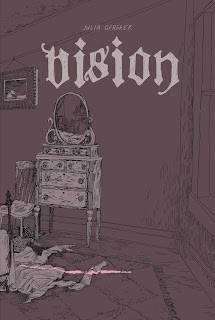 I've posted about the single issues of Vision here before, but I've really been looking forward to reading the book again in its assembled edition from Fantagraphics. There's one grim thought among many that continues to haunt me from this comic: the notion that we really are nothing more than how other people see us and what other people desire from us. But that version of "vision" is only part of the story. It at least has substance, it's at least something we can grapple with. What of the ways we lack vision? The ways we are blind to ourselves or blind to the minor creatures around us who, despite our gaze not falling on them with any consequence, struggle under weights as heavy as our own? 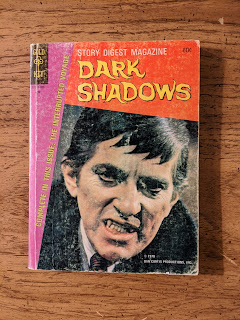 The Dark Shadows Story Digest Magazine was part of a series of spin-offs of Gold Key Comics' licensed franchises. The Dark Shadows issue, of which there was only one, pairs a multi-chapter story by D. J. Arneson with green-and-black and purple-and-black illustrations by Joe Certa.

The story is fairly threadbare and the conclusion hasty and ill-conceived; Barnabas willing travels back to the Salem of the past to reunite the soul of a Collins who died at sea with her lover--whose soul has been trapped by an evil witch. Oddly, the Salem chosen for this tale of deviltry and witch trials is the Salem of 1810, not the earlier, more witch-associated Salem you would expect. The illustrations, whoever, are amazing. I love this kind of monocolored art; it fills me with nostalgia. My copy of the digest came from the collection of someone's mother who was a lifelong fan of the show. 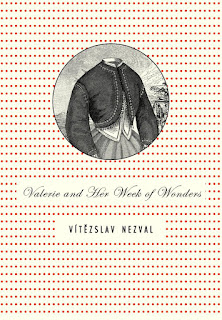 Vitezslav Nezval, Valerie and Her Week of Wonders

Better known in film form as an example of Czech surrealism, Vitezslav Nezval's Valerie and Her Week of Wonders is a strange combination of Gothic tale in the mold of Matthew Lewis's The Monk, fairy tale, and social commentary. Youth is the great treasure and great liability of the title character. The particular shade of beauty that only youth can bestow marks her as prey by men who both desire to possess her and hate the power it gives her over them and as competition for women who feel they have aged out of their dewiest years. 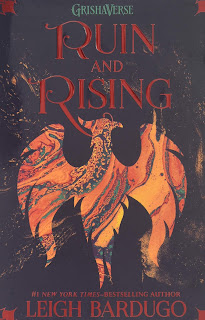 Ruin and Rising, the final book of Leigh Bardugo's Shadow and Bone trilogy, pulls no punches. The protagonists often seem to have a great, if weighed against desperate odds, plan to take back their country from the evil usurper who currently holds the throne, only to have that plan come crashing down around them. Casualties mount; friends are torn apart or transformed into creatures of shadow before their very eyes. By the end of the novel, it becomes clear that Alina may have to make the greatest sacrifice that could be asked of her to insure even the possibility of victory.

Overall, this is a great series. Yes, it has some "chosen one" elements, but Bardugo plays with this idea instead of relying on generic conventions. Similarly, there are more shades of gray in the characters' motivations, including the villainous Darkling, than I usually expect to find in this kind of storytelling. Also, the series doesn't skimp on brutality. 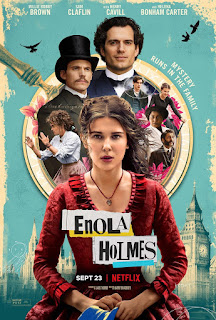 When Eudora Holmes, mother of Mycroft, Sherlock, and Enola Holmes, goes missing, the only one of his children who seems concerned is her daughter. And so, after evading Mycroft's plans to install her in a finishing school for proper young ladies, Enola is on the case, tracking down her mother's whereabouts and reason for disappearing from the family home. Along the way, Enola helps save a young marquis from his overbearing family and an assassin out to end his life before it even begins. Enola Holmes is a fun little movie; I wouldn't say no to a sequel. 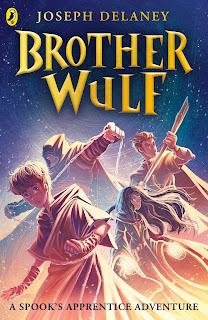 Brother Wulf is the first volume in a new series of Spook's Apprentice books. It's pretty fun to see Tom Ward, the kid who grew from frightened apprentice to novice monster hunter, now a fully fledged practitioner of his trade after following the course the previous books. However, despite the cartoonish cover they gave this novel, this one is fucking dark. Tom's aid is sought by a young monastic noviciate, but Brother Beowulf is haunted by ghosts, tormented by a faceless demon made of sticks, and can sometimes access divine aid by bashing his head against the floor while entreating the saints for protection. Brother Wulf gets taken into the custody of the inquisition, who promptly show him jars of teeth, tongues, and eyes they removed from previous "sinners." The Spook's Apprentice books have always had elements of the Gothic in them, but this one feels particularly drenched in Gothic conventions. 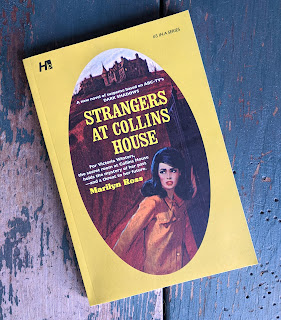 Marilyn Ross, Strangers at Collins House
Uncle Henry Collins has come to visit, which reveals that the elderly man keeps a secret room within the house that is an exact copy of a hotel room from the Ritz Hampton that holds portentous meaning for him. But the old man is not alone; he brings his similarly aged servant of many years, his servant's chauffeur son, and his daughter-in-law. He also brings a sorrowful mystery concerning the woman who once visited him in that hotel room--a woman who uncannily resembles Victoria Winters!
These books take on a tone that is alien to the Dark Shadows television show; whereas the continuous dream of the soap opera format allows for one arc to fold seamlessly into another, the books read like an unrelenting torrent of horrible happenings at the Collins House and really shine a spotlight on the strangeness of these versions of the familiar characters. Elizabeth Stoddard seems oddly unconcerned that Victoria is so often targeted for murder and mayhem, Roger is determined to prod merely awkward situations into fiery conflagrations, and Victoria's desire to uncover the truth of her past feels particularly maniacal. You also get the sense that "Marilyn Ross" doesn't like writing Carolyn or David, as convenient excuses are once again leveraged to get them out of the narrative entirely. Also, everyone is terrifyingly blase about the identity of the murderer when it is revealed. 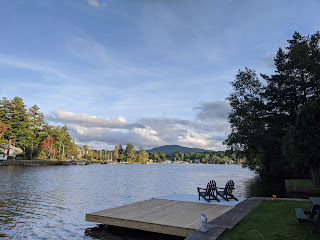 Lakeside Cabin
Vacations are all but impossible in the current situation, but we managed to get away to a lakeside cabin in the Adirondacks and not have to interact with other people for a few days and it was marvelous.
Posted by Jack Guignol at 12:00 AM