The Raging River, Avigon, A Dowry of Blood, and More

Things that brought me delight in February, 2021: 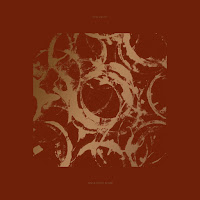 The Cult of Luna, The Raging River

If you've ever come face to face with an actual raging river, you know how utterly remorseless and unforgiving nature can be. One slip and you will have to make peace with the fact that the river will take you where it will and that it could easily break your body without there being a damn thing you can do about it. The Cult of Luna's The Raging River captures that feeling. This record's crushing churn is powerful; you either let it sweep you along until you reach the end, or you end up being destroyed by it. Fans of Neurosis, post-metal, and other sonic landslides will love this. 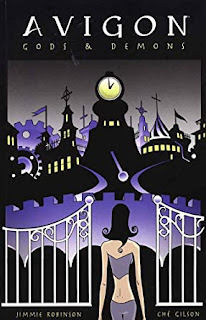 Art-wise, Avigon looks like it should have been a Slave Labor comic from the early 00s. Story-wise, this is one of the more interesting comics I've read in a while. The comic is about a robot named Avigon who runs away from her creator, but is expressly allowed to run away, and while free grapples with "what it means to be human." Not the most original premise, but the way it plays out is surprisingly brutal.

Avigon discovers that there are two kinds of people in the world: those who see her as an object and those who view her personhood only in terms of what they want from her--an essential division of dehumanization that we rarely see so starkly contrasted. Returning home to her creator, she realizes that she's always lived under a third, largely unexplored, category of dehumanization, but this is one she can at least negotiate. The striking, though muted, ending put me in mind of a number of other "happiness in slavery" narratives I've encountered. 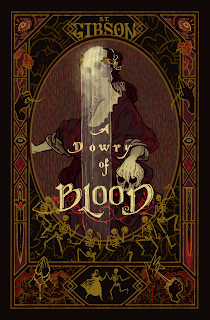 If you find yourself craving that old-school Anne Rice style of vampire novel, the kind of stuff she did pre-reptoids, embodied ghosts, and crisply ironed jeans, definitely check out S. T. Gibson's A Dowry of Blood. I can't be the only one taken back to the heady goth club days of the late 90s when I read lines like this: "When I was well enough, we made love, my fingers digging into your flesh with the mating drive of a creature that knew it was dying. When I wasn't, you read to me or plaited my hair. ... I think, my lord, that this is when you loved me best. When I was freshly made, and still as malleable as wet clay in your hands."

Of course, every vampire tale uses the undead as a metaphor for a cultural anxiety or larger societal fear. In A Dowry of Blood, we get a tale of abusive vampire love through the ages. The monster is dark, possessive, unrelenting, and tyrannous love. The fear is in the untested desire to break free, to live for oneself, to define again what it means to love and be loved. 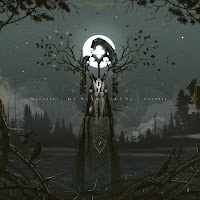 The ominous drone of a funeral organ is interrupted by the lacerating tone of a doom-laden guitar riff...must be a My Dying Bride song. Macabre Cabaret is a three-song EP that illustrates My Dying Bride's workmanlike commitment to a sound that has often been imitated but rarely equaled and perhaps never surpassed. Its twenty-minute runtime only has room for three tracks, but it's My Dying Bride, so you know what to expect: majestic sorrows, soaring melancholy, crushing despair. 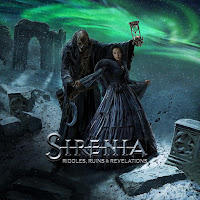 Riddles, Ruins & Revelations marries the band's expected Gothic, symphonic metal to a surprising retro vibe. Electronics have been increasingly prevalent on Sirenia's albums, as they have for many of the bands in their genre, but on this record Sirenia bravely push that sound to its logical conclusion; these aren't just electronic flourishes, this is a full-blown combination of symphonic metal with elements of synth and pop. I suspect that purists will not give this a fair shake, but to my ears it sounds fresh even though the influences are decidedly nostalgic at this point. 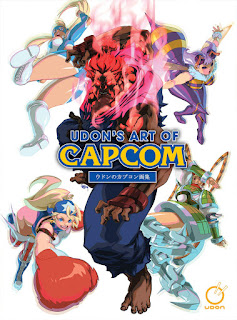 It's funny, superhero art leaves me cold but I find the character designs from Capcom's fighting games, which really aren't very far afield from superheroes at all, visually pleasing. Well, most of the time; you'll never convince me that Abigail is a cool character. The volumes in Udon's Art of Capcom collect art based on Capcom's various properties done by a variety of artists; images from Street Fighter predominate, but also included are pieces inspired by Darkstalkers, Rival Schools, Strider, etc. The Street Fighter Swimsuit Special Collection is exactly what it sounds like: art of the fighting game's characters in swimwear or otherwise at the beach. 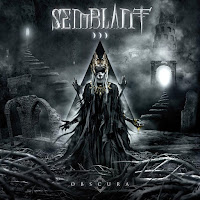 One of the great things about metal bands from South America is that they really seem as bound to the traditions of genre as bands from elsewhere. On Obscura, Semblant mix Gothic and symphonic metal with styles from the more extreme end of the metal spectrum, such as melodic death metal with a particularly "European" sound. I discovered this band purely by happenstance; since I don't recall hearing about them more widely, I'd say they deserve to be better known. Obscura is a good place to start; I'll definitely try to dig up some of their earlier work. 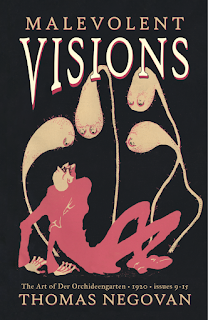 Malevolent Visions is the fifth volume of Century Guild's series that collects the art from the German magazine Der Orchideengarten. The artwork is, of course, amazing and the reproductions could not be of a higher quality. However, there is a feeling of sadness here in the underlying narrative that's inescapable. As the text notes, the artists whose work is featured here found themselves on opposite sides of the Germany's internal conflict in WWII. Some ended up in the camps as "degenerate artists," while others worked for the Nazi regime. The specter of disease also hangs over this volume; Thomas Negovan draws a comparison to the virulent influence of the era to our own grappling with a pandemic illness. 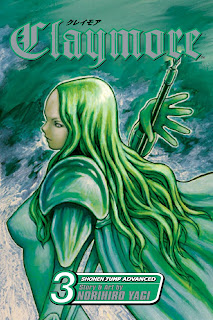 The first two chapters of volume 3 of Claymore conclude the fight against the yoma that has been killing the priests in a cathedral and reaffirms that Clare has chosen to let Raki travel with her, even though this seems at odds with her personality and her demon-slaying mission. However, the story then shifts to filling in some of the blank spaces in Clare's back story that explain why she might make this decision. As it turns out, Clare was once in a similar position to Raki; she was "adopted" by Teresa of the Faint Smile, the deadliest of the Claymores, when she was a child with nothing left in her life.

We also discover that, although it would be easy to assume otherwise from the fight scenes we get early in the manga, Clare is one of the weaker members of the Claymore organization. Speaking of the Claymore organization, it's clearly up to some shady dealings. Claymores who use too much of their power risk becoming "awakened beings," monsters even stronger than the usual yomi.

The story is heating up this far into the series, but the art remains fairly average. I do like the extra effort put into the awakened beings, though. Gotta love a good monster. 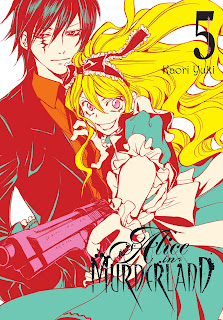 The battle royale between siblings continues! In these volumes there are startling (and, frankly, really confusing) revelations about Zeno and Tsukito, the unveiling of murderous elder sibling Ibara, and even killing the family's mother is floated as a distinct possibility. There is also a really interesting theme emerging surrounding the "battle spirits" that the various family members possess; most of the family seem to work in tandem with their battle spirits, but Stella's relationship with Alice feels more like a version of R. D. Laing's theory of the divided self. It will be interesting to see how that plays out in the volumes to come. 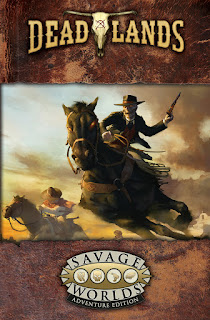 Deadlands is one of my favorite RPGs, so it's nice to see a new edition arrive. The new Deadlands books adapt the Weird West rules to the latest version of the Savage Worlds system; they also adapt the setting, jettisoning or toning down some of the elements that didn't age well or might not match the expectations of modern audiences. Overall, I was struck by how complete a package this feels like right out of the gate. Due to passing several Kickstarter goals, almost all the options you could want are here with no waiting for later "dlc" to drop. My one complaint is that the new book size for the Savage Worlds line sometimes makes the art feel a little small or cramped compared to other full-color productions. Also, Horror at Headstone Hill is an honest-to-god box set. It's been a while since I've encountered one of those. 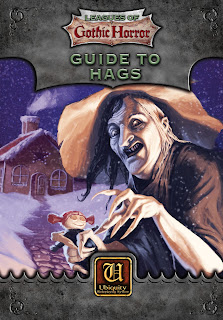 Leagues of Gothic Horror: Guide to Faeries, Guide to Hags, Guide to the Walking Dead

I'll probably never actually play Leagues of Gothic Horror, but I love the supplements as general sources of inspiration. The monster guides, in particular, collect folklore and alternate takes on the kind of monsters I use in my D&D games. These three guides will give you great ideas for changing up the lore of some classic Gothic monster types. Overall, I'd recommend this series of supplements to fans of GURPS supplements; they have the same rough-and-ready-but-full-of-interesting-and-usable-bits feels to them. 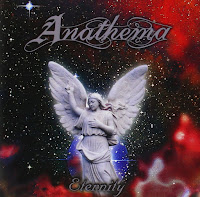 Despite its extremely naff cover, Anathema's Eternity marked an interesting turning point for Anathema. Eternity stands at the mid-point between the death-doom of their earliest releases and the alt rock and prog that would come later; taken on its own merits, Eternity has a nice mix of atmosphere and metal that remains heavy but not to an extreme that would frighten off the uninitiated. Admittedly, the clean vocals threw me off when this came out, but I've come to appreciate it more now than I did then. 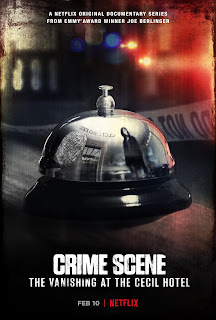 Crime Scene: The Vanishing at the Cecil Hotel

Crime Scene: The Vanishing at the Cecil Hotel is a documentary series that covers the disappearance of Elisa Lam, a Canadian college student who went missing during a trip to Los Angeles. Her story is fascinating and tragic. One aspect of the case that captured the public's attention is that footage from inside the infamous Cecil Hotel shows Lam seeming to interact with a person or persons (or otherworldly entity, as some speculation will have you believe) who is outside the camera's view; Lam's behavior in the elevator is strange and erratic, leading to a multitude of theories as to what was going on the day of her disappearance. My takeaway, however, is that internet sleuths are some of the worst people on earth.