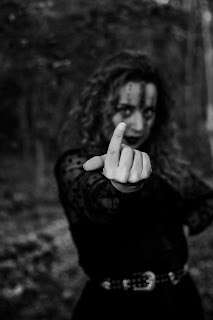 Below is a location described in the first issue of Strahd Loves, Man Kills. If you like this kind of content, consider buying an issue of Strahd Loves, Man Kills for more Ravenloft content. The price of the zine will have a slight increase in November due to recent changes to postal rates, so if you've been thinking of getting the first or second issue, there isn't a better time than now!
Strega Hollow

A location in Ravenloft

The town of Strega Hollow was initially founded as a mining camp when rich veins of silver were discovered in the mountains of the Brujamonte. The mining operation grew prosperous, enabling the camp to expand into a fully fledged town. Then, disaster struck. A series of mine collapses began to plague Strega Hollow. Without its silver lifeblood flowing freely, the townsfolk fell into despair and the town’s death seemed all but assured.

The town was granted a new lease on life when the women of the Vargori family arrived from out of the Mists. To the relief of the town’s stakeholders, the Vargori women had ready coin to purchase their claims on the disaster-prone mines. With the mines now under their sole ownership, the Vargoris still faced one challenge: convincing the populace to enter their employ and return to the perilous mines.

The Vargori family held a meeting in the town square. Magda Vargori offered the townspeople a strange and blasphemous proposition—if they would renounce their gods, they would be safe within the mines and the town would once again know the prosperity of old. The townsfolk initially jeered at this proposal, but within the week the town’s most desperate citizens resumed mining under the auspices of the Vargori family. These miners were paid well by the Vargoris, and the combination of the working miners’ sudden affluence and the absence of any further catastrophes within the mines set a powerful example. Soon the majority of the town’s miners had resumed their work and abandoned their faith in the gods.

In time, it became apparent that the Vargoris practiced the unhallowed ways of diabolic witchcraft. Nevertheless, the Vargori family were viewed as the town’s saviors, and the people of Strega Hollow even began to accept the Vargoris’ open practice of black magic because it was intimately tied to their own enrichment and security. Many of the townspeople have been converted to the worship of the archdevil Asmodeus, whom they view as the author of the town’s return to plenty and ease. As long as the mines remain fruitful and safe, the people see no reason to turn their hearts and minds back to the reverence of the gods.

Those familiar with Strega Hollow know the following facts:

• Although they hold no official offices within the town, the women of the Vargori family govern Strega Hollow.

• The Vargori clan worships Asmodeus and are all too eager to initiate others into his cult.

• Worship of the gods and conventional faiths have been outlawed in Strega Hollow. Though the town is kept in good repair, its churches have fallen into ruin and any remaining statues or icons of the gods have been defaced.

• The countryside around Strega Hollow is haunted by Old Samael, a monstrous goat who is especially fond of the flesh of priests.

Strega Hollow’s mining operations have brought the citizens a comfortable level of wealth that is reflected in the cleanliness and general upkeep of the town itself. The streets are in good repair and brightly lit at night, the buildings are kept structurally sound, and the populace seems happy and well-fed. However, anyone who stays within the town begins to notice that not everything is what it seems on the surface. Occult symbols decorate the facades of the town’s shops and homes, the townspeople make casual references to the glory of Asmodeus in conversation, and the street signs are written in both Common and Infernal.

Once they established themselves in Strega Hollow, the Vargori family built a magnificent mansion called the Black Manse at the heart of the town. Their home has a foreboding atmosphere, as it is constructed of ebony stone, the windows are obscured by blood-red curtains during the day, and the manse’s roofs are decorated with grotesque gargoyles. Townsfolk claim to have seen the gargoyles stretch their limbs before settling back into their customary positions; some even say they have witnessed the gargoyles take flight during the night, yet they always return with the coming of dawn.

The interior of the Black Manse is opulent and richly appointed in gold filigree. Visitors with a knowledge of arcana will note that the decorative motifs inside the house all carry a whiff of the infernal. Deep within the mansion are ritual chambers in which the Vargoris pledge their servitude to Asmodeus.

The Houndsman’s Pub is a rough tavern that is mostly frequented by the town’s miners. Cavernous chambers beneath the pub host illicit blood sports, such as pugilism and rat-baiting. Miners who attend these events at the Houndsman’s Pub place exorbitant bets on them; literal fortunes change hands night to night. The tavern also has several private rooms that can be rented on an hourly basis. These rooms have been enchanted to make them safe against scrying and other forms of divination magic. The witches of the Vargori family use these rooms to meet with anyone they deem too dangerous to invite into their home.

The Rackrends are a decrepit family of necromancers who own a crumbling estate on the outskirts of Strega Hollow. Their house sits at the base of a brackish tarn and has seen better days. Although the house emits an aura of stoic endurance, its foundations are cracked and the land around it is choked with black weeds.

The remaining members of the Rackrend family have inherited an ancestral duty to maintain the magical wards keeping an aberration imprisoned within a glass coffin in the tombs that lie under their home. This aberration takes the form of a beautiful young woman who appears to be sleeping—the rise and fall of her chest is visible inside her glass sarcophagus. If she were to awaken, she would prove to be a star spawn seer. As part of the ritualistic vigil that keeps the aberration incarcerated, the Rackrends wear black garb decorated with the yellowed bones of their ancestors and paint their faces to resemble macabre skulls.

The Vargori family of witches control the town of Strega Hollow by ensuring its continued prosperity through the diabolic pact they have forged with Asmodeus. In truth, the women of the Vargori clan worked in secret to cause the disasters that nearly ruined the town. Their sudden appearance in Strega Hollow as its saviors was not happenstance—it was part of a carefully engineered plan.

The family is led by the long-lived matriarch Magda Vargori, and it consists of her strangely innumerable daughters and menfolk from the town who have married into the family. Men who join the clan always assume the Vargori name, and they know better than to meddle in the affairs of the family’s women. All of the children born to the family are daughters and the women of the Vargori family are always tieflings no matter who fathers them.

The women of the Vargori clan are easily recognized in Strega Hollow. Their bodies are marked by scars denoting Asmodeus’s favor, such as occult words written in the Infernal script, arcane sigils, and other diabolic symbols. The witches of the Vargori family serve Asmodeus as his loyal handmaidens. Their ultimate goal is to summon Asmodeus from the Seven Hells so that he might rule Tepest and eventually bring the various domains of the Land of the Mists under his sole control.

Magda Vargori is the tiefling matriarch of the Vargori family, a powerful warlock, and the unofficial burgomaster of Strega Hollow. The townsfolk look to her for guidance, as it is openly known that her connection to Asmodeus keeps the town and its mines thriving. Magda has the stats of a warlock of the fiend.

Despite having a massive family of daughters, some of whom look to be in their twenties, Magda appears to be a comely woman in her mid-thirties. She is especially proud of her mane of curly auburn hair. Magda has lived for centuries; her youth and beauty have been preserved by her pact with Asmodeus. She fears that if she were to ever displease her master, he would revoke her longevity and let time ravage her body.

When the mood strikes her, Magda selects a new paramour from the population of Strega Hollow to be her consort. Indeed,  characters visiting Strega Hollow may have the misfortune of finding themselves the object of Magda’s rekindled interest in romance. When Magda becomes pregnant, the term of her pregnancy lasts only six months before she gives birth to a new member of the Vargori coven.

However, Magda suffers from a strange curse related to her daughters. She is fated to love her daughters dearly, but they are destined to vie against her for control of the Vargori family when they come into their own powers as members of the clan’s diabolic cult. Magda has slain several of her children over the long years, as they always eventually rise against their mother in opposition to her leadership of the family; each instance of a daughter dying by her hand haunts Magda.

Personality Trait. “Asmodeus lives on our lips and in our hearts.”

Ideal. “I want others to depend on my benevolence and largess. The townsfolk should bow and scrape in deference.”

Bond. “I love my daughters, even when they contest my leadership of the family.”

Flaw. “My life would be worth nothing without my youth and good looks.”

Although she plays the part of a bookish and naive young woman, Ivara Vargori is a tiefling witch who does Asmodeus’s bidding. Ivara poses as an innocent, scholarly girl who dresses like a prim and proper schoolmarm, but this guise is calculated to make her appear harmless or perhaps even in need of protection. However, she is unafraid of using others to get what she wants.

Like her mother, Ivara has the statblock of a warlock of the fiend. She is highly knowledgeable about arcane matters and is familiar with most languages. Ivara is currently Magda Vargori’s favored child, but they both know it is only a matter of time until they strive against each other.

Personality Trait. “When taken together, power and knowledge are the strongest intoxicants.”

Ideal. “I will replace my mother as matriarch of the Vargoris.”

Bond. “My family is my entire world.”

Flaw. “I burn with impatience to be recognized as a powerful witch in my own right.”

Old Samael is a legendary beast that prowls the countryside around Strega Hollow. Old Samael takes the form of a massive goat with jet-black fur, fearsome curling horns, and eyes that smolder with infernal flame. Use the statblock of a hell hound for Old Samael.

Old Samael often attacks those who have come to free the people of Strega Hollow from the Vargori’s family’s influence, but he also assaults travelers seemingly without rhyme or reason. He has an especial taste for the flesh and blood of priests, clerics, and devout followers of the gods.

The infernal goat is actually a faithful servant of the Vargori clan, rather than a mythical beast. The apparently random violence he metes out to wayfarers is meant to remind the people of Strega Hollow that they are safe within the town as long as they please the Vargori witches and accept the protection offered by the archdevil Asmodeus.