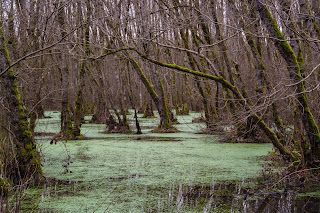 A location in Ravenloft

The Wychbog is a swampy forest that can be placed in any domain that could feature a wooded fen. The woods are avoided by the populace of any settlements nearby, save by those seeking a cure to an otherwise fatal illness. Stricken individuals left within the Wychbog sometimes find themselves miraculously restored to health. However, most who enter the Wychbog hoping for a remedy disappear and are never heard from again.

Those who emerge cured from the Wychbog have encountered the Sisters of the Wychbog. Wicked Hattie, Crooked Nell, and Ada Rottentooth are three ancient hags who live in a rustic stone cabin deep within the wetlands. They have the stats of a night hag, green hag, and annis hag, respectively. The Sisters of the Wychbog never disguise their terrible natures under palatable illusions. All three sisters are corpulent and slavering; they wear leather butcher’s aprons stained with blood and viscera.

When the Sisters of the Wychbog encounter a dying humanoid in their territory, they make that person a poisonous offer—they will cure whatever ailment besieges the sufferer, but in return that person must bring them a living child as payment. If the Sisters take a shine to the child, it is transformed into a hexblood. If the child proves truculent or unpromising, it is eaten—the Sisters of the Wychbog find the flesh of children to be a delectable treat.

If the Sisters of the Wychbog do not suit your purpose in adding this location to your game, consider replacing them with one of the following alternatives:

The slumbering angel. An angel was interred within the Wychbog in a deathless sleep after it nearly died trying to defend a penitent pilgrim from an attack by fiends. The healing power of the woods is simply the holy grace emitted by the celestial's presence. Learning of the link between the angel's fate and the curative aspect of the Wychbog poses a difficult moral quagmire: would it be better to unearth and revive the angel or keep it buried and retain the Wychbog as a place possessing supernatural therapeutic effects?

The kindly ones. There are two hidden factions who quietly make war against each other within the Wychbog. One faction is comprised of kindly fey creatures who heal the sick they find within the woods. The other is a coterie of necromancers who collect the bodies of the dying and use them as the raw materials needed to construct an army of the living dead. If the fey are not aided in stopping the necromancers, their undead army will eventually be unleashed on the land as a ravening horde of zombies, skeletons, and bog mummies.

A serpentfolk cult. The Wychbog is home to a yuan-ti cult who sometimes provide healing to those they discover within the marshy lands they have claimed. Individuals restored to health are sent back to their communities as living weapons—at any moment the healed person could transform into a monstrous giant snake and attack their fellow citizens.

The Feywild spring. Those who are cured in the Wychbog have discovered a magical spring whose healing waters originate in the Feywild. Unfortunately, the waters also affect their memories. At first, they find themselves unable to remember the spring that affected their miraculous cure. Once they return from the Wychbog, other memories begin to fade until nothing of the past remains accessible.

If you like this kind of content, consider buying an issue of Strahd Loves, Man Kills for more Ravenloft content! Both the second issue and the reprint of the first are down to single-digit copies available.