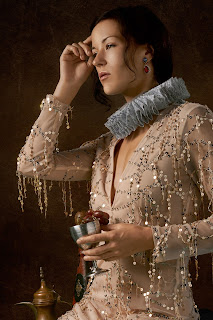 The most hated NPC I've ever made

It is often remarked upon that Donesta Sangino’s rise to fame in the art world was meteoric, and indeed she seemed to appear out of nowhere to become the name on every aesthete’s lips, but her origins were actually quite humble. Donesta was born to a poor, working-class family in Ghastria. She evidenced a talent for art, particularly for portraiture, and she contributed to the family’s meager finances by sketching passersby in charcoal for a few paltry copper pieces.

In her teenage years, Donesta Sangino found a patron—a wealthy nobleman who dabbled in the occult. Her patron not only supported Donesta monetarily, raising her out of poverty, he also taught her the arts of wizardry as well. This tutelage would prove to be his undoing; Donesta was a quick study, and she soon mastered enough enchantment magic to mentally enslave her patron. She drained his wealth, used his contacts among the upper crust to establish herself as the artist of the moment, and finally abandoned him to a life of abject penury when his money ran out.

As she continued to ply the trade of a portraitist, though by now she had exchanged the charcoal of her youth for vibrant oil paints, Donesta discovered arcane ways of using her art as a medium for her magic. When she paints a person known to her, she doesn’t just capture their likeness—she also captures a bit of their free will and binds it to the portrait. Some have noted that many of the incidental figures in her paintings resemble her artistic rivals—the very artists she has eclipsed seem to be referenced in her works. In truth, she has siphoned away the agency of her contemporaries and paved the way for her own success by bending her patrons and clients to her will.

Donesta Sangino is currently one of the most popular painters in the Land of the Mists. Despite the isolation that afflicts many domains, she is an uncannily well-known figure throughout Ravenloft. She is sought after by nobles, rich merchants, and powerful members of the clergy. Having one’s portrait painted by her is guaranteed to be worth the extravagant cost when balanced against the social capital to be gained from being noted as one of her patrons. Of course, none know the true price of sitting for Donesta Sangino’s cruel art.

Ideal. “I will rise up in the world by bleeding the wealthy and prestigious dry.”

Bond. “I only feel secure when surrounded by sycophants or those who are under my control.”

Flaw. “A return to poverty would be a fate worse than death. I willingly take great risks to grow my wealth and status.”

Donesta Sangino has the statblock of an enchanter, though her Charisma is 16 and she is proficient in the Deception and Persuasion skills. She also possesses the Displacement ability of an illusionist, which recharges whenever she casts a spell of 1st level or higher. Donesta can channel her magic into her paintings in the following ways:

Monster Creation. Donesta Sangino can create any monster by painting it for a number of uninterrupted days equal to the creature’s challenge rating. At the end of the final day, the creature springs forth from the canvas and obeys her will.

Painted Portals. When Donesta paints a landscape, she creates a mystical conduit through the Mists to that location. As an action, Donesta can touch a landscape painting of her creation and be instantly teleported to that area.

Soul-Stealing Portraits. If a humanoid has had their portrait painted by Donesta Sangino, they make saving throws against her spells with disadvantage as long as the portrait is in her possession.

Donesta Sangino deftly maneuvers the rich and powerful into her web like a cunning spider. As a renowned artist, Sangino finds herself in demand—it is considered a mark of power and prestige to have your portrait painted by Donesta or to have the essence of your estate or home captured in one of her famed landscape paintings. Consider the following plots when featuring Donesta in an adventure:

• A friend of the characters has had their portrait painted by the famed artist Donesta Sangino. They will be horrified to discover that their ally is now seemingly under Donesta’s thumb, lavishing her with extravagant gifts and throwing ostentatious parties in her honor.

• Artists on the brink of success are being killed by monsters who bleed oily pigment when wounded. Following the trail of death and destruction will lead back to Donesta Sangino, who is using her painted monstrosities to murder artists she considers potential rivals.

• After a previous run in with Donesta, the characters learn that she has painted their portraits from memory. They have a vested interest in stealing or destroying these portraits before Donesta Sangino can use them to exact revenge against the characters.

• Donesta has decided that one of the player characters is her latest muse. She will stop at nothing to kidnap the source of her inspiration.

• Donesta’s peculiar skills with magical painting could provide exactly the aid needed for the characters to take down a greater evil, but what horrific price would the artist want in trade for her services?

If you like this kind of content and you haven't check it out already, print copies of Strahd Loves, Man Kills are still available here. Only a handful of the first and second issues left, though!