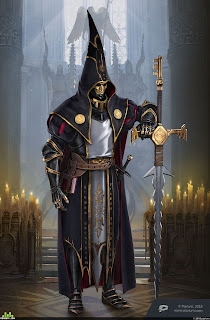 Two NPCs from my Ravenloft campaign

As a child, Grigori Krast’s father left him at an orphanage run by the Church of Ezra. The hardships he endured there only served to make him unfeeling, cruel, and suspicious. As an adult, Grigori became an ordained priest of the Church of Ezra and made the hunting of witches his vocation. Grigori Krast is a tall, gaunt man who rarely smiles. He is never without the blood-encrusted maul that has served him well in his campaign against witchery.

Ideal. “I will rid the world of the stench of witchery.”

Bond. “My father’s lesson was harsh, but the orphanage made me the man I am today.”

Flaw. “I look for pretenses to accuse others of witchcraft.”

Vulcra took the veil as a nun of the Sisterhood of the Requiem Vow, a militant ascetic sect of the Ulmist Inquisition. By all accounts, Sister Vulcra was slain by devils who assaulted the Sisterhood’s stronghold, but she miraculously arose reborn from her crypt three days after burial. Many in the Requiem Vow believe her to be a living saint. Sister Vulcra is a stern woman who wears a suit of battered armor and covers her beautiful hair with a bloodstained wimple.

Ideal. “I have been called to serve a higher power as their chosen disciple.”

Bond. “I have the utmost respect for sainted martyrs.”

Flaw. “I disdain anyone who notices my beauty.”

Adventures with Grigori and Vulcra

Reverent Krast uses the stats of a war priest. Sister Vulcra uses the stats of an inquisitor of the sword. The duo are often accompanied by orphaned children they “adopt” in their travels. These children are purposefully reduced to a feral, wild state. They are kept on leashes and their teeth are filed to sharp points to make them into weapons useful to the two witchfinders. These children use stats similar to those of wolves. Consider the following plots when featuring Grigori Krast and Sister Vulcra in an adventure:

• The witchfinders have accused an innocent of practicing black magic and plan to burn them at the stake to demonstrate the fate that awaits heretics.

• The pair have taken a child into their retinue who is not an orphan; the child’s parents are desperate to have the girl returned to them.

• One of the pair have been captured by a coven of witches. The other demands that the characters help them free their compatriot. If the characters refuse, they will be accused of being in league with fiends.

If you like this kind of content, check out Strahd Loves, Man Kills, my Ravenloft fanzine. Every print copy sold of the current issue pushes it closer to becoming a free pdf as community content! Two issues are currently available as free pdfs: