Below is my take on the Ravenloft domain of Souragne done up in the 5e D&D style. My approach here was to combine the "Louisana voodoo" vibe of the domain's original presentation with the carceral-focused vignette in Van Richten's Guide to Ravenloft. If you like this sort of thing, check out Strahd Loves, Man Kills issue four. Just as a heads up, I'm down to two copies of the new issue, so don't wait too long if you want a copy. Or pick up a back issue while you can. Issue two is sold out again, and there's only five issue left of the reprint of the first issue. 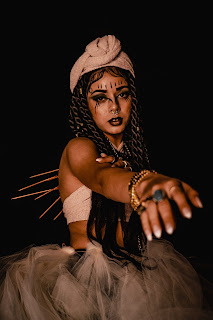 The island of Souragne is a humid, insect-infested domain largely comprised of swamps and fetid bayous, with a few grand plantations dominating the scarce arable land. The dreaded Detresse Prison sits at the outskirts of civilization in Souragne.

The ground in Souragne is perpetually sodden. The deceased are buried in above-ground crypts rather than interred in the waterlogged earth. Even then, coffins are wrapped in chains prior to entombment—a local superstitious custom undertaken to prevent the dead from returning as ravening zombies.

The aristocratic plantation owners of Souragne tend to belong to the Church of Ezra. Commoners, especially plantation laborers, follow an animistic, druidic faith that venerates the spirits of the swamp. Chief among the nature spirits they placate are the feared Baron of the Dead and the protective Maiden of the Swamp. The faithful of this folk religion dance themselves into ecstatic trances to the sounds of wild drums. In this deranged state, they are sometimes possessed by the nature spirits they serve.

Those familiar with Souragne know the following facts:

• Souragne is a land of swamps and bayous.

• Most of the populace live in the city of Port d’Elhour or on one of the plantations surrounding Marais d’Tarascon.

• Detresse Prison incarcerates the island’s most dangerous criminals. It is said to be inescapable.

Souragnien society is deeply divided between the lower class of plantation laborers and fishers and the hereditary, land-owning aristocracy. When players create characters from Souragne, consider asking them the following questions.

Which faith do you belong to? Although the Souragniens are spiritually divided along class lines, commoners sometimes give lip service to their masters’ faith in Ezra while continuing to venerate the spirits of the swamp. Likewise, members of the aristocracy sometimes slip out under the cover of night to secretly join in the worship of swamp’s nature spirits.

Have you ever ventured into the bayous? Souragne’s bayous hold a curious attraction, even though they are known to extremely dangerous. Souragniens sometimes feel themselves beckoned into the uncharted wilds of the island’s wetlands.

The inhabited areas of Souragne cohere around the vast plantations maintained around Marais d’Tarascon and the seaside city of Port d’Elhour.

Detresse Prison is an imposing edifice of gray stone surrounded by a tall wall topped with shards of broken glass. Within the prison, the inmates are subjected to corporal punishment, torture, and hard labor as a rehabilitating regime supposedly intended to reform them.

Anton Misroi, the prison’s warden, lends prison laborers to the island’s plantation owners for a small fee, but the prisoners he brings them are strangely silent, tireless, and require remarkably little sustenance. The unspeakable truth is that the prisoners that Misroi sends to the plantations are already deceased—they are zombies reanimated from the corpses of the prisoners who die behind Detresse Prison’s grim walls.

Few live within Maison d’Sablet, Souragne’s seemingly endless mire of mossy swampland, but some loners dwell in floating houses secreted deep within the isle’s overgrown bayous. Besides these isolated misfits, the swamps are home to alligators, giant insects, bullywugs, and snakes. The Maiden of the Swamp, a powerful dryad who numbers among the most respected of the spirits of the swamp, makes her home among a tangled grove of weeping willows.

The town of Marais d’Tarascon is named after the wealthy Tarascon family who continue to reign over Souragnien society. The town sits at the center of a series of sprawling plantations, each dominated by a grand plantation house, that are owned by the island’s aristocratic families.

Port d’Elhour is a small city on Souragne’s coast. The city feels cramped, with low stone buildings crowded close together. The city’s compact sprawl is interrupted by narrow, winding streets weaving throughout. Most common folk in Port d’Elhour fish the island’s coast, but they stay far from the Mists that border Souragne’s stretch of sea.

The current mayor of Port d’Elhour is Bernard Foquelaine, a pale, spidery man who is keen to see the arrest of his fellow citizens for the most minor infractions. Those hauled before his court are often sentenced to life imprisonment in Detresse Prison. Residents of the city worry that Port d’Elhour is slowly sinking into the sea.

In society, Anton Misroi presented himself as an upstanding gentleman. But within the walls of the prison over which he was warden, he was a sadist who believed righteousness was on his side. When his torturous punishments finally drove the prison’s inmates to rise up, the bloody riot that ensued drew the attentions of the Dark Powers. During the uprising, Misroi was drowned in the swamps surrounding the prison. But he rose again soon after, an undead warden in search of inmates.

Anton Misroi has the statistics of a zombie lord (see Kobold Press’s Creature Codex), but he uses a hat of disguise to walk among the inmates and officers of Detresse Prison as a tall, thin man with a stately posture and steely eyes.

Dance of the Dead. Anton Misroi can animate any corpse within Detresse Prison as a zombie. He can control an unlimited number of zombies that have been created in this manner.

Closing the Borders. When Anton Misroi wishes to close the borders of his domain, a thick red fog rises from the swamp and creeps across the land. Anyone who enters this fog finds themselves confronted by endless hordes of zombies clad in the tattered remains of prison uniforms and dragging broken manacles in their wake.

Anton Misroi is compelled to imprison and punish those who have been sentenced to Detresse Prison, but the order he craves is always disrupted by the rebellion of the prison’s inmates:

• Despite Misroi’s draconian rule and love of sadistic punishment, Detresse Prison is a site of sporadic and violent riots and uprisings among the incarcerated.

• Although none have yet managed to escape, Misroi’s prisoners continually attempt ingenious plans to breach Detresse’s walls and seek freedom.

Anton Misroi is self-righteous, but his belief in pain as the path to redemption is a mask for his sadism. He convinces himself that the horrible conditions in which he keeps his prisoners and the harsh corporal punishments he metes out are for their benefit, but in reality he merely pleases his own warped desires.

Ideal. “I punish to purge the sickness of criminality.”

Bond. “Every prisoner is like an errant child, and I, their strict father, must take pains to correct them.”

Flaw. “Even in death my charges are not purged of their crimes. Their bodies must continue to work off their debts to society.”