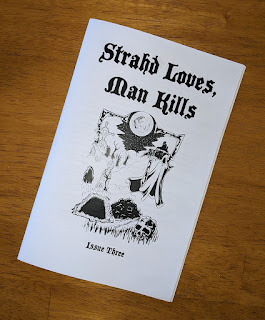 I'm happy to announce that I've sold enough print copies of issue three of Strahd Loves, Man Kills, my Ravenloft fanzine, that the pdf is now available to all and sundry at no charge.

Issue three joins issue one and issue two as part of the communal offerings that anyone playing D&D can make use of. Issue four looks to join them quite soon.

Here's what is in issue three:

A version of Sanguinia inspired by the Gothic fear of feudalism’s oppressive excesses.

Two nonplayer characters for use in your games: Reverend Krast and Sister Vulcra

Notes on sinister spiritualists you might create as characters for games set in the Domains of Dread.

A table that generates Dark Secrets for the characters in your campaign and mechanics for making those secrets matter.

A bibliography of the dark fantasy genre for your edification and entertainment.