Below is my write up for the Shadowlands, a Ravenloft domain that I've given a bit of a revision for my home campaign. It's always been a "dark fantasy" themed domain, but I've pushed it in an "Arthurian horror" direction, with added influences from Elric, The Witcher, and Dark Souls. If you enjoy this write up, you can get it nicely formatted in issue five of Strahd Loves, Man Kills, my Ravenloft fanzine. Also, there's one more print copy of issue one left if you want to get in on the ground floor. 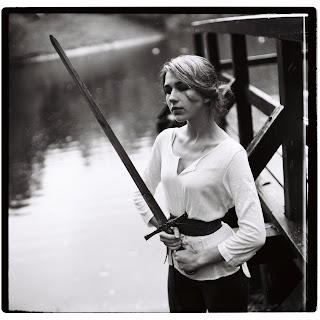 When a teenage girl named Elena Faith-hold drew the black runesword Ebonbane from the rock in which it was embedded, the people of the Shadowlands rejoiced to see the fulfillment of a foretold prophecy. To the folk of the Shadowlands, this feat was a sign that Elena was the promised Knight Protector who would lead an army to liberate Avonleigh from the clutches of the dreaded necromancer Morgoroth and his legions of the undead. When the unicorn Addar knelt at her feet, even some of the most skeptical Shadowlanders were convinced that their savior had arrived. Peasants and nobles alike flock to her banner, ready to march against the evil that has befouled their sundered kingdom.

However, not all is as it seems in the Shadowlands. The land is divided, and competing factions prepare to make war for control of the domain. Is Elena a pawn in a larger conflict or will she usher in a terrible age of reddened swords and anarchy?

Those familiar with the Shadowlands know the following facts:

• The realm of Avonleigh has fallen to the undead armies of the necromancer Morgoroth.

• Following Avonleigh’s fall, the Shadowlands have become a haunted land where fantastical monsters threaten the lives of its populace.

• After she pulled the sword Ebonbane from a legendary stone, Elena Faith-hold was recognized as the Knight Protector of the Shadowlands, seemingly destined to lead an army to liberate Avonleigh and unite the Shadowlands’ two human realms.

Which realm do you hail from? The people of Avonleigh live under the thumb of an undead tyrant, but some manage to escape their occupied realm. In contrast, the people of Nidala possess more freedom, but a different kind of fervent despotism has begun to take hold of those who follow Elena Faith-hold. The majority of the Shadowlands’ nonhuman populace lives within the Phantasmal Forest.

Which faction do you owe fealty to? The lives of adventurers in the Shadowlands are often colored by allegiance to one of its factions. Do you support the Knight Protector, the Knights of the Circle, the druids of the Dolmens, the Sparrowhawks, or are you an agent of Morgoroth?

How do you seek glory? Many Shadowlanders hope to win glory and etch their names into the annals of history—to be remembered for their valor, purity of purpose, and chivalry. What lofty ideals do you pursue?

The Shadowlands would be an idyllic realm if it were not for the corruption of Avonleigh, the false savior dominated by the malign sword she carries, and the gloomy atmosphere of fallen glory that has settled over the domain.

Prior to the rise of the necromancer Morgoroth, Avonleigh was a verdant land of bountiful farms, deep forests, and gentle hills. Avonleigh was the chivalrous seat of the land’s kings and queens. Now Avonleigh is a blighted place of darkness, haunted fens, perpetual storms, and undead horrors. Morgoroth is served by death knights, wights, and legions of skeleton warriors who oppress the people trapped within his realm. From Tergeron Manor, Morgoroth uses the shards of a shattered magic mirror to plan his conquest of Nidala and the subjugation of the Sparrowhawks hiding in the Phantasmal Forest.

The Dolmens are a circle of ancient standing stones tended by druids who maintain a sacred bonfire at the center of the henge. The druids view both Morgoroth and Elena Faith-hold as enemies; they believe that both must be cast upon the flames to save the Shadowlands.

The druids give credence to a prophecy concerning a warrior who will willingly sacrifice themselves to their holy bonfire and emerge as a Hollow One. This warrior is fated to defeat both Morgoroth and the false savior Elena Faith-hold. Some members of the Knights of the Circle have allied themselves with the druids and their cause; a few even dare hope that they are the warrior destined to be granted a lofty purpose by the druids’ sacred fire.

The Knight Protector has ignited a zealous and oppressive fervor in the realm of Nidala. Acting under the fell influence of Ebonbane and the corrupt unicorn Addar, Elena’s paranoid dictates incite violence. She decries traitors, spies, and nefarious “demihumans,” a slur she uses to denigrate the realm’s nonhuman populations, which has led to accusations levied against the innocent, instances of false imprisonment, and public executions in the city of Touraine.

Many members of the Knights of the Circle believe wholeheartedly in Elena’s mission; elevated to the status of a political saint representing a righteous cause, the Knight Protector’s Decrees of Faith have become law—though few realize that Elena is a fallen paladin and a puppet of the insidious magical sword that is always at her side.

The Phantasmal Forest clings to the southern borders of Avonleigh and extends into the Mists. The depths of the Phantasmal Forest are home to a confederation of elves, dwarves, gnomes, firbolgs, and halflings who call themselves the Sparrowhawks. They are the remnants of the domain’s native nonhuman populaces who have been victimized by Elena Faith-hold’s pogroms and usurped from their lands. The Sparrowhawks fight a guerrilla war against humankind in the Shadowlands, hoping to one day claim the domain as their sole dominion.

The elves of the Phantasmal Forest safeguard a number of ancient scrolls written by eladrin visionaries. These writings give them hope that a great sorcerer will be born among them. They believe this scion will free them from persecution and usher in a gilded age in which humanity will be banished from the land.

On the outskirts of the Phantasmal Forest sits Shadowborn Manor, a keep haunted by Lady Kateri Shadowborn—the first Knight Protector to wield Ebonbane. Ridding herself of the sword by plunging it into a fabled stone did not save Kateri. Upon her death, Lady Kateri’s specter was trapped in Shadowborn Manor. Anyone brave enough to breach its threshold to release her could potentially rally her vengeful spirit to their cause, whether it be for good or ill.

The accursed runesword known as Ebonbane is the root of the evil that has overtaken the Shadowlands. Ebonbane is a fiend trapped in the form of a black, sigil-etched longsword—a tool forged for the Blood War in the Lower Planes.

Ebonbane has stats similar to those of Blackrazor. It is aided by the many powerful creatures who have fallen under its sway.

Elena Faith-hold. Ebonbane has completely dominated Elena Faith-hold, its current wielder. As a paladin who has succumbed to Ebonbane’s influence, Elena has stats similar to those of a blackguard.

Banemaw. Ebonbane holds an ancient green shadow dragon called Banemaw in thrall. Ebonbane uses Banemaw to terrorize the populace of Nidala, keeping them in a state of heightened fear. Banemaw and Elena sometimes engage in mock battle to ensure the populace’s dependence on Elena’s protection.

Addar. Despite presenting an image of mythic purity, Addar is a corrupt unicorn who keeps Elena under Ebonbane’s control.

Closing the Borders. When Ebonbane chooses to close the borders of its domain, ash and cinder fall from the sky.

Ebonbane is continually frustrated by the fact that it must rely on mortal vassals to encourage the violence and unrest it feeds upon.

• Ebonbane must find a wielder it is able to dominate and has a limited ability to act on its own in the Shadowlands.

• Ebonbane is troubled by the idea that Elena could reassert her will and break free of its control.

Ebonbane is bloodthirsty and delights in the chaos of war. Created as a weapon intended for the endless conflict of the Blood War, Ebonbane can think of little else save the suffering that springs forth from the clash of competing and irreconcilable ideologies.

Personality Trait. “There is no sweeter sound than the anguished cries of the battlefield.”

Ideal. “The Shadowlands will be a sea of spilled blood.”

Bond. “My wielder is but a pawn in my schemes.”

Flaw. “I burn to be able to kill under my own power.”