Below is my revision of the Unholy Order of the Grave, a faction in Ravenloft that originated in the second-edition version of the setting, and the Ring and Wand Society, a faction of my own creation. If you enjoy this write up, you can get it nicely formatted in issue five of Strahd Loves, Man Kills, my Ravenloft fanzine. There's about five print copies left, so I wouldn't wait too long! 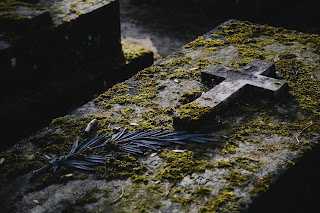 The Unholy Order of the Grave

Hidden within Darkon is Necropolis, a city populated by the undead. Necropolis is ruled by an entity known only as Death. Death is a primordial being—some occultists believe Death is the embodiment of the very concept of the extinction of life. Others believe it is merely an antediluvian undead creature of great power. The Unholy Order of the Grave is a faction of corporeal undead agents who advance Death’s obscure purposes.

The Unholy Order of the Grave carries out Death’s behest within Necropolis and abroad. In Necropolis, the agents of the Unholy Order act as Death’s enforcers, keeping the undead inhabiting the city in line. The members of the Unholy Order who are sent into the Mists venture into other domains to pursue a number of missions assigned by Death, but chief among them is to seek the consort who will bear Death’s child—a prophesied bringer of destruction whose unnatural birth will spell the end of all life within the Domains of Dread.