Below is a location from my Ravenloft campaign--it serves as an area that can be explored when the players and their characters need answers to questions of deep lore. If you enjoy this write up, you can get it nicely formatted in issue five of Strahd Loves, Man Kills, my Ravenloft fanzine. There are only four print copies left, so I wouldn't wait too long! 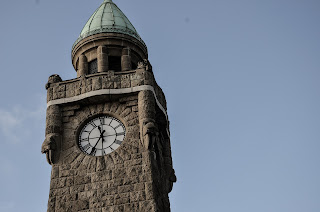 Ohrbach Tower is a lonely clock tower constructed from a weathered material that appears to be stone, but is in fact the petrified flesh of a dead god. No matter the climate or weather, the tower’s “stone” is uncannily warm to the touch.

The tower has no fixed location in the Land of the Mists. The Mists arise, seemingly at random, to momentarily surround the tower; when the Mists recede, Ohrbach Tower has been transplanted to a new location. As such, Ohrbach Tower can be found in any domain. The length of its stay in any one place is unpredictable. Some Vistani claim that Mist talismans exist that allow their bearers to unerringly find Ohrbach Tower.

The interior of Ohrbach Tower is dominated by floor after floor of library shelves, all of which are tightly packed with rare and ancient tomes. Books from across the multiverse find their way to Ohrbach Tower; it is a repository of knowledge that has been preserved for posterity via magical means. Scholars of the occult postulate that one copy of every book that has ever been written, even those that were never copied by mortal hands, exists somewhere amid the convoluted stacks of Ohrbach Tower.

The Librarian of Ohrbach Tower

If an obscure piece of lore needs to be uncovered, the dusty shelves of Ohrbach Tower likely hold a tome or scroll that can provide the information sought. However, finding the right book among the tower’s sprawling libraries poses a challenge. The surest way to find what you seek in Ohrbach Tower is to consult its current librarian. Roll on the following table to determine who the characters encounter within Ohrbach Tower.

1 Nikolai Valpurga, a nosferatu who is only coherent and lucid for a few hours after he has fed on blood.

2 Azrafina, a fallen planetar who rebelled against the gods by hiding eldritch tomes that were slated for destruction.

3 Varushka, an unusually studious marilith with a keen interest in dragon chess.

4 Menoch, a berbalang who carved the tower from the remains of a calcified god.

5 Ul’vora, an ill-tempered spirit naga who is attended by a number of lizardfolk assistant librarians.

6 Khelana, a drider who was punished by the matron of her house for safeguarding texts related to Eilistraee.

7 Malistrad, a beholder with a disturbingly large collection of illustrated erotica.

8 Kaylisti, a lamia condemned by the demon lord Graz’zt for preferring quite contemplation to the tyranny of seduction.

9 Marovik, an overly chatty lich with a passion for amateur astronomy.

10 Damophet, an arcanaloth who engages in protracted negotiations before agreeing to provide aid.

11 Tserberon, a satyr who refuses to help anyone who will not first consent to a night of raucous drinking.

12 Strixa, a dusk hag who insists on reading the palms of anyone who enters Ohrbach Tower.