I was pretty excited when I saw the Scholomance on the map of Borca in Van Richten's Guide to Ravenloft. I've long been fascinated by the Scholomance's folklore, so it was definitely a welcome addition to the setting--especially since it was so tersely detailed that it left plenty of space to develop it just the way I wanted for my campaign. If you enjoy this write up, you can get it nicely formatted in issue five of Strahd Loves, Man Kills, my Ravenloft fanzine. There's only a few print copies left, so I wouldn't wait too long! 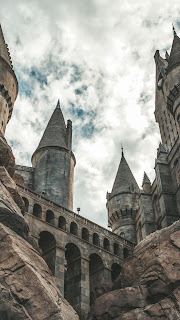 The Scholomance is a legendary school of black magic located near Mount Gries in the southeastern corner of Borca. Arrival at the Scholomance means traversing the treacherous mountains and braving the horrors that lay in wait. A small, but immeasurably deep, lake sits nearby. The lake is a cauldron where the region's perpetual, never-ceasing storms of thunder, lightning, and rain tempestuously brew. A dragon sleeps beneath the lake’s waters; it is said that the dragon emerges from the lake to devour any uninvited guests who attempt to breach the Scholomance’s stout stone walls. Only young scholars possessing rare gifts—which might be more correctly termed curses—are offered a place at the Scholomance and admitted to its wicked curriculum of occult study.

Most students at the Scholomance graduate from their studies, are invited to join the Rainmaker Society, and begin to steer Borcan politics. Students judged to be among the lowest performing are sent to the Nine Hells as payment for the devils’ services. These students are transformed into lemures and must strive for advancement amid Hell’s endless strife. Despite the danger inherent to its vile areas of instruction and the hellish fate that awaits some of it scholars, the Scholomance has a rich heritage, an unmatched reputation among students of the dark arts, and a number of infamous alumni in the Land of the Mists.

The Master of the Scholomance

1 Strahd von Zarovich, whose torment by the Dark Powers includes a stint serving as the headmaster of the school.

2 Leonora Vos, a necromancer who is using the school’s resources and vast library to ascertain the whereabouts of the Veil of Iron Tears—an artifact capable of summoning an army of corporeal undead.

3 The archdevil Mephistopheles, who is secretly training the students of the Scholomance to aid him in displacing Asmodeus from his rule of the Nine Hells.

4 Tasha, also known as Iggwilv, has positioned herself as the school’s headmistress to gain infernal knowledge she can use against the archdevils of the Nine Hells.

5 Azalin Rex, whose disappearance from Darkon can be explained by his recent tenure as headmaster of the Scholomance.

7 Nochvanator, a dracolich obsessed with regicide and the overthrow of Borca’s Darklords.

8 A disembodied voice from the Far Realm, whose name—if it can be said to have a name at all—is a mystery.