Below is my version of the Ravenloft domain of Rokushima Taiyoo, a Gothic burlesque on Sengoku-era Japan. If you like this write-up, consider purchasing a copy of Strahd Loves, Man Kills #6, which contains the write-up with a few more embellishments. Also available is Strahd Loves, Man Kills #7, which is similarly chock full of Gothic fantasy characters, settings, and adventure seeds for your home campaign. There's only about 10 copies of each left in stock. 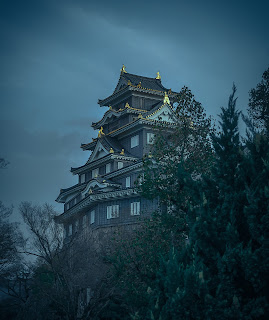 The four remaining islands of Rokushima Taiyoo are locked in a deadly civil war. Haki Shinpi, the former warlord, left each of his children one of Rokushima Taiyoo’s isles as their sole dominion, but this bequest was not enough to satisfy their ambitions. Each of Haki’s heirs desires to rule a united Rokushima Taiyoo, and they are consumed with the idea of eliminating their siblings, annexing their territories, and assuming sole control of the nation.

The people of Rokushima Taiyoo suffer greatly as the Shinpi family battles against itself. Famine is rampant due to soldiers devastating farmland as acts of wartime sabotage, and deprivation has brought periodic outbreaks of virulent disease. Additionally, the four islands of Rokushima Taiyoo are wracked by natural disasters, such as typhoons and earthquakes, and are troubled by a resurgence of monsters prowling their countrysides.

• The rulers of Rokushima Taiyoo’s four islands wage perpetual war against each other. The conflict between them involves attempted invasions, skirmishes, and assassinations.

• Organized crime syndicates fill the void left by the absence of Haki Shinpi’s rule. These criminal organizations, whose members are instantly recognizable by their elaborate tattoos, run black markets and operate protection rackets.

• Hurricanes and other calamities afflict the isles.

Rokuan Characters
Characters from Rokushima Taiyoo have been forced to become accustomed to hardship and war. However, they continue to value industriousness, filial duty, and staying true to one’s principles. When players create characters from Rokushima Taiyoo, consider asking them the following questions.
Have you fought for one of the Shinpi heirs? The ongoing civil war in Rokushima Taiyoo presents opportunities for the young and the brave to pursue wealth and glory.
What natural disaster have you survived? Rokushima Taiyoo is assailed by floods, plagues, volcanic eruptions, typhoons, earthquakes, and stranger phenomena that defies explanation.
What supernatural threat bedeviled your home? Oni, hungry ghosts, and fey creatures have become emboldened by the conflict that tears Rokushima Taiyoo apart.

Settlements and Sites
Rokushima Taiyoo’s four major islands surround a body of water called Great Mirror Lake and are surrounded in turn by the treacherous Poison Sea. The islands are mountainous and heavily forested, with villages, towns, and cities often at great distance from each other. Although Rokushima Taiyoo is isolated by the Mists, the islands are visited by traders from Darkon, Lamordia, and Dementlieu.

Kage
Kage is the island realm of Hanzo Shinpi, a monk who broke his vow to abjure the pursuit of wealth and prestige when he realized that the defeat of his siblings would clear the path for him to assume rule over Rokushima Taiyoo. (Hanzo’s statistics are similar to those of a martial arts adept.) Kage’s deep forests hide villages where obscure clans pass down secret techniques of shadow magic. Hanzo often employs the adepts of these villages as his personal spies and assassins; they have managed to infiltrate
the households of all his siblings.

Kaminari
Kaminari is the dominion of Kanto Shinpi, an uncultivated ruffian who hopes to usurp his siblings through brute force. (Kanto’s statistics are similar to those of a gladiator.) The Orin River flows downward from the mountain range known as the Seven Towers in Kaminari, and it is famed for its curative powers. However, few dare drink from the Orin, as it is jealously guarded by fey creatures. The Seven Towers are dominated by tribal clans of humans and goliaths. These barbarians call upon the power of the tempests that rage across the mountains to aid them in battle.

Kiku
The beautiful isle of Kiku is ruled by Kazumi Shinpi, a wizard skilled in the arts of creating and commanding the undead. (Kazumi’s statistics are similar to those of a necromancer.) Though Kiku is renowned for its annual chrysanthemum festival, the isle hides dark secrets, such as the Forest of Ruined Hope—an infamous site of suicides. The few who have ventured into it claim that those who kill themselves within the forest are doomed to walk as the living dead.

Senso
Senso is the isle ruled by Tomoe Shinpi, the most skilled warrior of her clan’s current generation. (Tomoe’s statistics are similar to those of a warlord.) Tomoe is served by human and hobgoblin warriors sworn to her service as vassals; their loyalty to her is fanatical, bordering on romantic or spiritual devotion. In the far north of Senso stands Mount Frost, the home of a gold dragon who has become corrupted by the evil that permeates the domain. Cultists worship the dragon, whom they regard as a god.

Haki Shinpi
Haki Shinpi is a particularly powerless Darklord, doomed to watch his children squander all that he built over his lifetime.

Haki Shinpi’s Powers and Dominion
Haki Shinpi now exists as a wraith who haunts the land. Closing the Borders. When Haki Shinpi wishes to close the domain, toxic vapors rise from its bodies of water.

Haki Shinpi’s Torment
Haki Shinpi is cursed to watch as his children tarnish his legacy, destroy the nation he united, and bring dishonor to his name:
• Haki’s cannot harm his own children.
• If one of his heirs dies by their sibling’s hand, the island they were deeded in his will sinks into the sea and is destroyed. This has already happened twice. Rokushima Taiyoo was originally a nation of six islands—until two siblings killed each other in the ongoing civil war.

Roleplaying Haki Shinpi
In life, Haki Shinpi was ruthless and exacting. As wraith, he seethes at the state of the country he once ruled as warlord.
Personality Trait. “I hold my accomplishments in the highest regard.”
Ideal. “Rokushima Taiyoo is my legacy.”
Bond. “I hoped that my bloodline would become a lasting dynastic power in Rokushima Taiyoo.”
Flaw. “My rage toward my children is boundless.”