What follows is a recap of the horror movies and tv I watched in October. Fair warning: there may be spoilers. 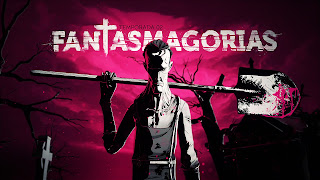 Fantasmagorias is a collection of short animated films that retell the supernatural legends and murderous tales of Latin America. And I do mean that the episodes are short; each one is about 2-4 minutes long, essentially the perfect length to get a nice quick dose of Halloween feelings. I loved Fantasmagorias; from the Sin City-esque art style to the grim folklore it details, it was a pitch perfect fit for my interests. 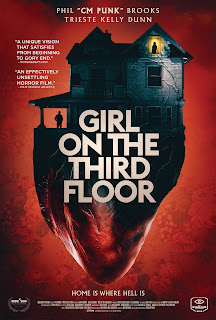 Girl on the Third Floor

A married man with a child on the way buys a fixer-upper to make into a home. This is his second chance at treading the straight and narrow path after being caught defrauding his financial customers of their life savings. Of course, the house is haunted. Obviously so, in fact. Look, if you don't realize that a house shouldn't be constantly jizzing all over the place and randomly shitting out marbles, don't try to do the home repairs yourself. The last third of the movie is complete bullshit; oddly enough, the most eerie part of the film is the opening credit sequence before the movie proper even starts. Girl on the Third Floor also wants to SAY SOMETHING about how MEN who TREAT WOMEN POORLY should be PUNISHED, but the moral is compromised by the way that innocent people (and a dog!) get caught in the crossfire. 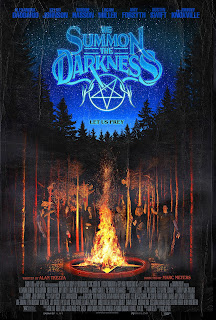 We Summon the Darkness

Three teenage girls on their way to a heavy metal concert in the midst of a spate of Satanic ritual slayings meet up with three boys in band...surely the killings and this chance meeting couldn't possibly be connected, right? Well, they are, but with a twist you're likely to see coming a mile away. We Summon the Darkness is mildly fun, but it also feels like a series of missed opportunities; not enough thought was put into the characters' behavior or how to stitch the film's various tangents into a coherent whole. As always I want my Satanic murder sprees to be more Satanic. 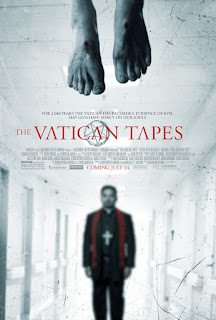 The first rule of making a horror movie about demonic possession is that it can't be boring. The Vatican Tapes unfortunately pays that rule no mind. Everything in this movie can be found done better in a superior movie. There's a seen of uncanny vomiting...that absolutely pales in comparison to The Exorcist. Add a little levitation, a little bodily contortion, and what do you get? A by-the-book checklist of obligations that adds nothing new. However, there was an unintentionally funny riff here. The main character was selected for demonic possession because her mother was a prostitute, but her father insists that he wasn't a client; he was just giving her money to get her out of the lifestyle. Don't kid yourself, man. You were paying her for exclusive access to her services. 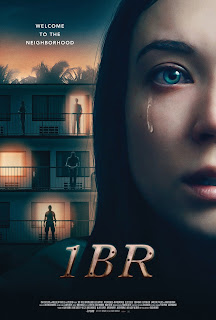 A young woman flees her toxic family and finds a room for rent in an exclusive apartment complex that seems too good to be true. It is, in fact, too good to be true. Despite a strong performance from the lead, this film just doesn't go anywhere interesting; it suffers from a malady common to the modern horror film: it just isn't willing to go to an extreme place, even thought the potential for real horror is there, which works against the genre it tries to claim some space in. Also, it is very weird how her aspirations as a fashion designer are noted in the film, particularly with lingering shots of her sewing machine, but that doesn't end up being a matter of any import in the movie. 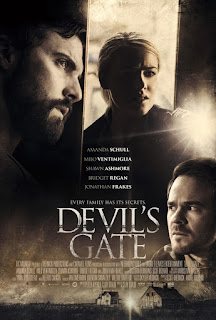 Devil's Gate squanders a strong premise: an FBI agent is called in to investigate a missing woman and her child, while the husband and father is holed up in his trap-laden remote farmhouse standing guard over something unnatural kept in a basement cage. Unfortunately, the movie doggedly insists on getting steadily worse as each minute ticks by. By the time the resolution of the movie is clear, it's impossible to care about the convoluted mess on display. It doesn't help matters that every character in the movie acts in ways that fail to resemble recognizably human behavior. That said, I did rip off the plot line mercilessly for an rpg session that was quite fun, so I managed to get something of a return on my hour and half investment watching it. 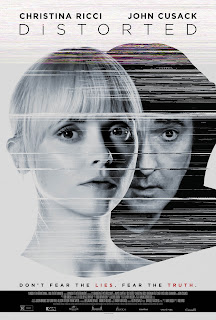 A traumatized wife is convinced by her husband to move into an ultra-deluxe apartment building boasting cutting-edge security and internal surveillance. It turns out about as well as you'd think; she soon finds herself plunged into the world of conspiracy theories and the possibilities of technological mind control. It just doesn't really work; I think we're supposed to be thrilled by the ambiguous nature of the threat--is it real or is our protagonist mentally ill?--but it's super clear from the outset that whatever is going on cannot be blamed on her mental state. Also, I find it hilarious that supposed to believe that Christina Ricci is using the internet in a cafe and only has ONE tab open on her laptop. My suspension of disbelief can only handle so much. 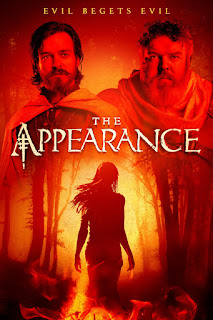 I'm a simple man: you give me a moderately atmospheric horror movie set in the Middle Ages with ominous monks wearing plague doctor masks and a creepy witch lady and I'll be happy. On top of that, The Appearance is the rare Gothic-inspired horror flick where the agent of the Inquisition is the good guy. Called to an abbey to investigate a mysterious murder that has been blamed on a caged young woman who is suspected to be a witch, out heroic yet troubled Inquisitor finds himself embroiled in a far darker history than he had any reason to expect would be awaiting him. 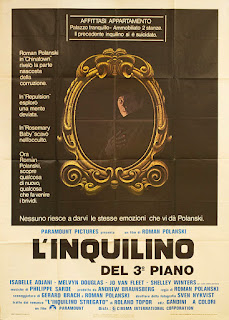 A Polish man living in Paris moves into an apartment that suddenly became vacant after the previous tenant jumped from the balcony in an apparent suicide attempt. The former tenant's life begins to invade his own; for example, the owner of the nearby cafe insists on serving him the usual order of the now deceased woman. He starts to suspect that the people around him are trying to turn him into an uncanny replication of the former tenant. And yet, part of his replacement of the dead tenant is due to his own seemingly willful strangeness; why does he go out of his way to befriend a beautiful young woman who was friends with the former tenant? (And their relationship really strained my suspension of disbelief, although it does have the prefect date moment: making out while watching Enter the Dragon.) The Tenant had some really striking imagery and direction, as you would expect, but ultimately the movie just feels weirdly cheap and limp in comparison to Rosemary's Baby or Repulsion. 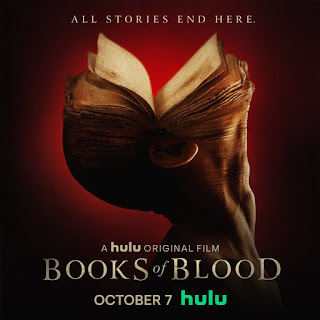 Clive Barker's Books of Blood collections were absolutely formative horror short fiction for me. The good news about this mediocre adaptation of them is that they bear so little resemblance to the stories they're based on that you can't really feel all that disappointed by their many failings. Barker's stories pulled no punches, but their film versions seem obsessed with keeping things nice and watered down. Also, I laugh out loud every time these movies feature a professor character with an on-campus office the size of a small apartment. I suppose that's something that exists somewhere, but that is entirely alien to my personal experience. 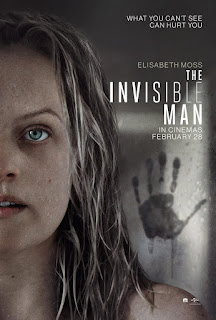 There's an invisible man, sleepin' in your bed--who you gonna call? Well, don't call the cops because even after it's revealed that your genius ex has made an invisibility suit they won't believe you that he's been using it to stalk you and murder your loved ones. Elisabeth Moss kills it in the lead role, but The Invisible Man stretches credulity by granting the evil ex the physical strength and uncanny coordination of a Marvel villain, which actively works against the real horror of narcissistic, possessive former partners that the movie is ostensibly trying to delve into. Frankly, the mundane reality is more terrifying than the exaggerated monstrosity this movie plays with. 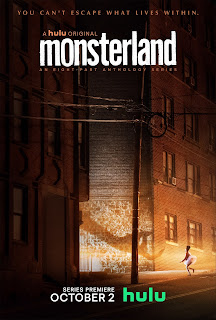 Monsterland is a horror anthology adapted from the stories in Nathan Ballingrud's North American Lake Monsters, a collection that I thoroughly enjoyed. Though not every adaptation in the series is successful, I thought that about half the episodes were fantastic; the remaining episodes range from poorly conceived to just a little flat, which is par for the course when it comes to a wide-ranging anthology series that is the work of diverse hands taking the wheel. The best of the episodes preserve the incisive intensity of the original stories. The worst of them lose the plot, especially when they jettison the context of Ballingrud's critique of toxic masculinity--the powerful through-line of North American Lake Monsters. Fair warning, though: many of the episodes in Monsterland bring a naturalistic bleakness to the table that won't be for every viewer. 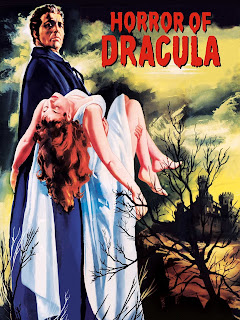 Horror of Dracula is the first entry in Hammer's long-running series of Dracula films. Although it takes some huge liberties with the source material, it's an exceptionally fun riff on Bram Stoker's ideas. Really, you can't beat Christopher Lee as Count Dracula and Peter Cushing as Van Helsing. And aside from the most iconic duo in horror movie history, everything else falls nicely into place: the side characters are well portrayed, the costumes are exquisite, and the backdrops are perfectly Gothic. The breakneck conclusion to the film still feels impossible after you've seen it; a quick glance at the clock and it will seem like things can't be resolved in the few minutes left in the film's runtime, but things fall neatly into place--what a ride! 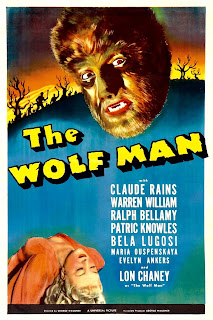 I'm not sure how unpopular an opinion this is, but I sincerely think The Wolf Man is one of the best of the classic Universal horror movies. Dracula and Frankenstein are certainly more visually iconic, but they both suffer from being slow and overly talky in places. The Wolf Man, despite being a product of its fairly tame time, feels much more visceral and emphatic. It also feels like a movie with more to say; Larry Talbot's wolfish pursuit of Gwen, which includes violating her privacy by spying on her with a telescope and hoping to get her alone in the woods despite her avowed engagement to another man, eerily presages his descent into bestial bloodlust as a werewolf.