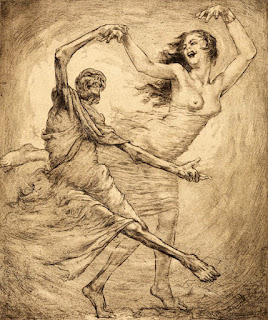 The episode began with Luka, Tristan, and Kylic gathered together at the Cat's Eyepatch to toast to the memory of the recently-departed Anton Sellvek. As the evening wore on, Luka suggested that it was time to return to Eisengraz, speak again to Celestine the Dove, and finally resolve the curse that was still afflicting the trio.

Before venturing forth, Luka put his affairs in order and decided to say goodbye to Ivara Olashenko in case this adventure was to be his last. However, as he was walking toward Ivara's house, Luka saw the young scholar being led from her home in chains by two parish officers. Luka stopped them and learned that Ivara stood accused of cold-blooded murder in a public square. Conversing with the young scholar through the bars of the carriage she had been loaded into, Ivara imparted that she had committed many crimes, but ironically had been arrested for a crime she didn't actually commit. She and Luka wished each other well, and she said that her mother would get her out of this one way or another.

The group hired Rafael, the coachman they took on their venture, and set off to the cursed village of Eisengraz. The journey to Eisengraz was largely uneventful, save for a duel that the group witnessed in a small town on the way. Their carriage was stopped along the high street by a teenage girl with tangled black hair and roughly-sewn clothes so that the duel could proceed in full view of the main thoroughfare. The duelists in question turned out to be a strutting peacock decked out in velvet finery, a ridiculously lacy shirtfront, and a flashy new rapier. His opponent was a blond woman wearing the rustic leathers of a forester. The dandy assumed a trained fighting stance; the woman simply drew her blade and ran him through in one thrust, leaving his body to fall in the street as she went back to drinking in the tavern across the street. Tristan admired her skill with a sword, but declined the opportunity to meet the winner of the duel. Rafael maneuvered the party's carriage around the dandy swordsman's corpse, and they carried on their way to Eisengraz.

The accursed village of Eisengraz still smoulders and stinks of fire, even though it was put to the torch generations ago. Luka could tell that a number of shod horses had been ridden into the town recently, but he saw no evidence of tracks leading away from the village--it was likely that the group was not going to be along in Eisengraz. Luka also used his connection to the land to determine that there were three supernatural forces at work in the vicinity: celestial (Celestine, obviously), the undead, and a dragon. 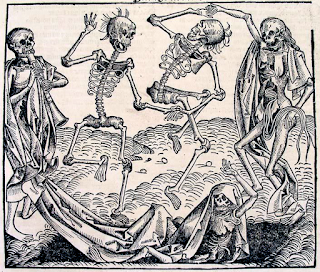 More evidence of other people within the town was discovered when the group spotted a number of horses tethered to the charred slats of a paddock fence. Not wanting to run into anything that would delay Luka's plan to speak to Celestine, the trio kept to the shadows behind the few remaining buildings in Eisengraz. As they approached the sound of an argument could be heard. Rounding the stone walls of Celestine's cottage, Luka, Kylic, and Tristan saw the Dove being confronted by Artem (their contact in the Church of Saintly Blood), a heavily armored woman, and a large number of armed acolytes wearing white tabards. Artem was haranguing Celestine that it was her duty to go with them, act as an emblem of the faith, and fight the darkness that troubles Krevborna on behalf of the Church.

This stand-off between Artem and his churchmen and the angel Celestine had been unwittingly set into motion by Tristan. Since Tristan had dutifully reported to Artem, his superior within the Church of Saintly Blood, Artem knew where the Dove was and set off with his lackeys to return Celestine to useful service to the Church.

Enter the player characters. What followed was a series of tense stand-offs, in which various parties tried to convince other parties of a course of action. Artem was insistent that the Dove needed to be brought to heel and re-bound into the service of the Church. The characters mostly wanted to deescalate the situation and for everyone else to be reasonable. The Dove noted the sword that she had previously bestowed upon Luka and told him that she had given him the tool, and now he had the opportunity to use it.

What she meant was that Luka has previously struck a bargain with Celestine: he was to take the sword she had forged and kill a priest with it. In return for this act of priest-slaying, she would lift the curse that afflicted Kylic, Tristam, and Luka. Now that there were a number of priests to choose from among Artem and his troop, Luka could simply kill one and fulfill the Dove's request. 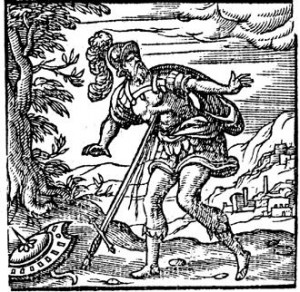 But that wasn't Luka's plan. Luka drew the sword given to him by Celestine and...fell upon its blade.

Luka had been absent for the last few adventures that the rest of the party had pursued. On his own time, Luka was secretly pursuing priestly investiture; when he turned the Dove's sword against himself, he was effectively killing a priest as she had stipulated.

Of course, Kylic and Tristan rushed to Luka's side to heal him back from the cold brink of death. As they did so, they felt the black tendrils that crept at the edges of their vision--an ever-present reminder of their curse--recede until it disappeared completely.

However, while the Dove impassively watched Luka's bloody self-sacrifice, a cohort of Artem's acolytes was approaching her from behind with a pair of rune-etched shackles. What followed was a series of melees interrupted by attempts to settle the situation. At various points: Kylic froze the shackle-bearing in place with his magic so he could later be easily disarmed from him; Celestine impaled a few of the acolytes on a silver spear; Tristan did his best to defuse the situation; Kylic faced off against the woman in plate mail, and surprisingly was getting the best of her; the newly-revived Luka put himself once more in the path of death by making himself a target for Celestine's fury--but a protective spell from Kylic kept him from being skewered by her powerful spear.

The skirmishes and arguments came to an impasse. In the heat of the moment, Tristan make a vow to Celestine...and then, a familiar sorrowful song was heard in the distance...and from the sound of it the source of the song was rapidly approaching. The singer was the ghostly presence of the deceased adventurer that the group had previously encountered within the Grail Tombs. She was followed by a roiling black darkness, within which could sometimes be seen shades of human faces or forms like that of man. 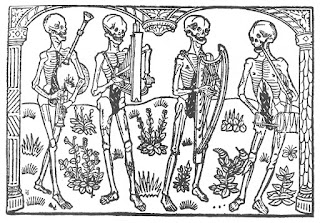 The spectral presence was clearly angry; she accused Tristan and company of being oath-breakers since they had promised to free her from the crypts beneath the Church of St. Othric--because it had not been in their power to do so, she regarded them as untrustworthy and as objects of her frustrated revenge.

(She also mentioned that she had been freed by someone else--surmised to have been the Master.)

The spectral woman returned to her song, but this time it was charged with her hatred and malice. Kylic, Tristan, and Luka felt the song roll over them like a storm of cold knives digging into their flesh, but they managed to stand their ground. Artem, his armored lieutenant, and most of the acolytes were not so lucky; they fell to the earth, their hearts stopped by the apparition's dirge. A new battle commenced. Kylic managed to disperse much of the roiling black cloud of desolation, but what remained troubled Tristan by draining away his bodily vitality. Luka wielded the rapier formerly in the care of Anton with aplomb. Tristan finally sent the spectral woman to a final rest in the name of St. Othric and destroyed what remained of the roiling dark.

When the dust settled, only one acolyte (named Wilhelm) remained alive. Celestine, who had withheld herself from the battle so that she might observe, was impressed that the party and the acolytes had fought side-by-side against the undead threat despite the fact that they had been enemies only moments before. In her eyes, perhaps their was still something worth saving within the troubled hearts of humanity--she pledged her aid against the darkness of the Master in the battle to come.

Most of the dead churchmen were buried outside accursed Eisengraz, but the bodies of Artem and his lieutenant were transported back to Chancel to be handed over to the Church for all due ceremony. Wilhelm was dropped off at the Church of St. Othric, so that he might learn further of the mysteries and contemplate his own survival after the events of the Sacrifice at Eisengraz. Sensing trouble on the wind, Kylic split from the group and went into hiding, telling his companions that if they needed him they should contact an urchin named Thinpenny. Luka made inquires and discovered more of the facts of the murder that Ivara was accused of, as well as that she was currently being held in Newmarket Gaol.

Back at the Cat's Eyepatch, a letter was waiting for Luka and Tristan. It reads:

I regret to inform you that evil things are afoot in Sellvek’s Hollow. Please come when you can. 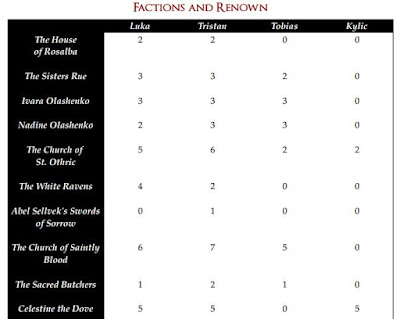