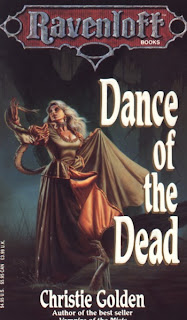 The descriptions of Larissa learning DANCE MAGIC linger over the curves of her body, despite these scenes supposedly being about the empowerment of women by women. Worse still is the flashback where Raoul recalls first meeting Larissa: Raoul watches her dance, “performing solely for her own pleasure”; she looks like “a feather caught by a wanton breeze”; he thinks of her as “fey and wild.” You know why this flashback is gross? Raoul is appraising her beauty and at this point she is TWELVE. TWELVE YEARS OLD AND HE IS WATCHING HER THINKING YEAH KIND OF A HOTTIE. Thanks for getting all pedo on us, Golden.

Oh, Raoul is also thinking what a good investment she is because he's just won Larissa in a card game against her father, I shit you not.

While it started off with surprising (albeit minor league) promise, Dance of the Dead quickly spirals into the land of schlock as soon as Larissa's tutelage in the art of DANCE MAGIC happens. The chapters in which the Maiden instructs Larissa are bad enough, but things get even worse when she's sent to the mansion of of Anton Misroi (Souragne's zombie-master Dark Lord) where she learns the DANCE OF THE DEAD! Of course, as the Maiden did earlier, Misroi makes Larissa put on a clothes that give him a better view of her tits; “It was shockingly low-cut,” the narration intimates. She must have some rack on her—everybody in the novel wants a peek at it.

Gosh! As a parting gift, Misroi gives her a riding crop; Larissa discovers that to initiate the Dance of the Dead she has to flog herself with it. Kinky.

On the way back to the Maiden's home, Larissa rides something called a LEZerd. I'm just going to leave that tidbit here and let you mull it over on your own.

At this point in the novel we're treated to some pretty squicky animal torture by its antagonists. Larissa leads a really unspectacular siege against the showboat to free all the animals within. Guess what? She does the DANCE OF DEATH at the climax! That didn't seem like a plot point at all when Misroi taught it to her, right? Unfortunately, Larissa accidentally kills her new will o' the wisp-lite boyfriend with the DANCE OF THE DEAD. Ooops.

In the end, the crew of the magic showboat decides that Larissa should be their new captain since Raoul & co. are now dead. Yeah, I can see how being good at dancing makes one a suitable captain of a ship despite not having a whit of sailing or navigation experience. But, as the saying goes, the show must go on.

Thankfully, the novel does not.
Posted by Jack Guignol at 12:12 AM

Eventually, seeing Larissa prance about in her stage costume like some sort of Ravenloftian Shakira proves too much for Raoul, so he concocts a bizarre plan to have her attacked by a sailor so that he might save her; his theory seems to be that in return for his protection Larissa is sure to give him a little sugar. Larissa reacts with an almost surprising level of horror when Raoul attempts to force himself on her, runs away, and is aided in her escape by some witchy guy from the swamp. Of course, she eventually returns to her “Uncle's” boat even though he just tried to molest her. What a tease or something.

Larissa has to run away from Raoul and his magic showboat again. She takes refuge in the swamps of Souragne, where she meets a spirit of nature known as the Maiden. Up until this point the novel had been cruising at a median depth—neither good nor bad, just plowing along in a workmanly paperback fashion—but once we get to the scenes of Larissa and the Maiden things plunge back into the terribleness I've come to expect from a Ravenloft novel. You see, the Maiden endeavors to teach Larissa...DANCE MAGIC! And the scenes in which Larissa learns to channel elemental magic through the power of DANCE are more than a bit like the scenes in Dirty Dancing where the Swayze teaches Baby to shake it like a Polaroid picture. This is, horrifyingly enough, the Gothic Fantasy equivalent to a training montage from Flashdance or Fame.

But, being a Christie Golden novel, it's got to get a bit sexually weird. The Maiden demands that Larissa where something skankier to...make the MAGIC DANCE better or something: “To Larissa's annoyance, the Maiden made the dancer remove her clothes and tear them into pieces for new garments. Larissa bound her breasts with a halter made of the skirt's material and fashioned a skirt of the lighter-weight chemise. She fastened the skirt about her slender waist and glanced at the Maiden for approval. 'No,' the Maiden chided. She tugged the skirt from Larissa's waist and retied it so it hugged her hips. 'The only time I've ever worn this little is when I was bathing,' Larissa muttered.” What happens in the swamp, stays in the swamp.

But then, this focus on Larissa's body is pretty typical of Golden's writing style. I don't know how else to put this, but she writes about women the way a fourteen year old boy would. From the way the narrative lens glides over feminine bodies throughout the novel it's clear that we, as readers, are meant to be complicity elided with the male gaze that evaluates and objectifies the physicality of women. For example, check out the weird pit stop this description of a woman's anger takes to dwell on her tits: “Her cheeks were flushed and her green eyes sparkling. Her low-cut dress, the same one she had worn at dinner revealed the tops of her breasts. She was absolutely stunning in her rage.” Translation: she is really mad but also she has great titties.
Posted by Jack Guignol at 12:00 AM

Psycho-sexual Ravenloft: Dance of the Dead I

Last week somebody ended-up on my blog after searching for "funny Ravenloft stories." Welp, here you go.  Laugh until you cry, friends.

Since it's the Halloween season, it's only fitting that October sees the return of the Psycho-sexual Ravenloft series. If this is your first time at the rodeo, the premise is simple: I read one of the official Ravenloft novels from back in the '90s, post about all the weird and yucky sex bits that lurk under the book's otherwise banal surface, and you all get a good laugh at my pain as I slog through this underwhelming sequence of tie-in novels.

Next up is Christie Golden's Dance of the Dead. Oh god, not another Golden novel so soon. I wonder if that guy who had a meltdown the last time I dared besmirch Golden's literary status is reading; are you still out there, buddy? I digress.

I'm actually a bit surprised to find myself saying this, but...Dance of the Dead seems to be an order of magnitude better than Vampire in the Mists. Perhaps I've been brain damaged by the first two Ravenloft books I've read as part of this project, but I'm willing to hazard a guess that freed from the tyranny of having to write about Jander and Strahd has enabled Golden to get an actual plot in motion and to create some characters who are human enough to be at least slightly compelling. The set-up of Dance of the Dead is actually interesting; the novel follows the exploits of a traveling showboat that docks in various domains in Ravenloft and puts on a magic-powered cabaret for the downtrodden denizens of the Demi-plane of Dread. Of course, things go awry and the performing troupe find their boat arriving at Souragne, Ravenloft's Louisiana cum Haiti zombieland pastiche.

Of course, this is a Golden novel, so we're not going to escape having to read about a bunch of rapey male characters. In fact, we get our first abusive guy on the second page of the novel when we're introduced to Sardan, an actor who likes to make the leading woman in the troupe's play sexually uncomfortable: “it was well-known that Liza couldn't stand Sardan. As a result, Sardan made it a point to turn every onstage kiss into a passionate one, taking a devilish glee in the fact that Liza had to pretend to enjoy it.” Yep, we're back in Ravenloft all right.

And back in Ravenloft we are indeed, as we're next introduced to the disturbing relationship between our heroine, the white-maned Larissa, and Raoul, her guardian and the captain of the showboat. From the way Raoul is initially described, it's clear that we're meant to take him as a figure of sexual power. “He was big in more than a physical sense,” the narration winks at us and lolls its tongue lasciviously. Furthermore, we're treated to the “flash of his sea-green eyes, the tightening of his sensual mouth, the clenching of his powerful, callused hands.” Since he's such an obviously virile specimen of manhood, it seems only natural that Larissa would want to ride him like a Shetland pony, but you know what turns it from bodice-ripper to stomach-churner? The fact that she calls him “Uncle” throughout the first third of the novel.
Posted by Jack Guignol at 12:05 AM