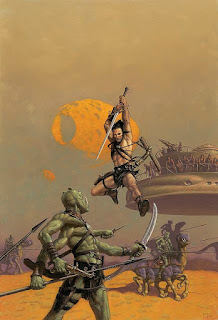 The playtest of Aos's B/X Mars game has concluded successfully! One thing we talked about when he was writing it was how it might be converted to 5e D&D rules. Now that the playtest is over, I've got some thoughts about how to model the bespoke character classes that will be in the B/X Mars book when it's finalized.

Race Options
B/X Mars ties race and class together into one package, as you might expect from the B/X designation. Here's how I'd map out their separation in 5e, without going down the road of bespoke races (though that is certainly an option I'd consider working on):


Technological Weapons
The DMG has stats for laser pistols and rifles that would work. Just replace "energy cell" with "tubes." Yeah, they'll be pretty deadly but in my experience B/X Mars has Gygaxian levels of lethality, so it's probably a good fit. You could always give the PCs a 10 hp kicker if you want to compensate.
Posted by Jack Guignol at 12:01 AM