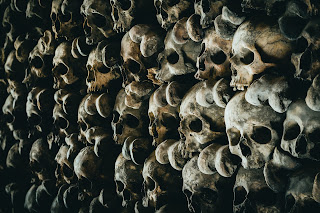 This post updates a few old secret societies and faction from previous versions of the Ravenloft setting for my home campaign. If you like this sort of thing, check out my Ravenloft zine, Strahd Loves, Man Kills.

The Ata-Bestaal is a lodge of monster hunters who track and slay the unnatural beasts that stalk the Land of the Mists. However, the Ata-Bestaal do not pit their lives against monstrosities because they are motivated by altruism or a higher calling. Rather, the members of the Ata-Bestaal revel in the hunt itself and the glory of primal bloodshed. Each member of the Ata-Bestaal longs to shed the trappings of civilization by becoming bestial and untamed by the laws of society. To the hunters of the Ata-Bestaal, embracing a philosophy of “might makes right” and an outlook that idealizes nature as “red of tooth and claw” offers a model of vital existence far superior to that of the civilized world’s stifling insistence upon propriety, restraint, and self-control.

Some members of the Ata-Bestaal pursue the goal of transcending the burdens of civilized life by engaging lycanthropes in hand-to-hand combat in hopes of both defeating worthy foes and acquiring their peculiar curse. Others seek the aid of mad scientists, such as Frantisek Markov and his ilk, who are willing to transform them into mongrelfolk. One group of Ata-Bestaal hunters have captured an enclave of scientists belonging to the Simic Combine who were brought through the Mists from Ravnica. The unfortunate Simic biomancers are being forced to graft bits and pieces of animal flesh onto the hunters’ bodies to alter them beyond their mundane origins.

The Church of Hala is a mystical, nature-based faith practiced by self-proclaimed witches. The Church reveres Hala, a Witch Goddess who is believed to the last remaining member of a nine-god pantheon. Since witchery is generally associated with the malignancy of hags and the practice of black magic in the Land of the Mists, the witches of the Church of Hala often find themselves misunderstood, if not reviled outright. Even so, the witches of Hala operate a number of small hospices that offer healing to any who seek their aid.

Lately, the witches of the Church of Hala have taken an interest in the land of Tepest. In particular, they plot to overthrow Lorinda and free the people of Viktal from the bloody burden of the Tithe.

The Dark Delvers are a group of spelunkers, cavers, and dungeon explorers who search deep beneath the earth for a primordial entity known as Hated Mother. The Dark Delvers believe that the Hated Mother is the source of the supernatural evil that pervades the Land of the Mists; their hope is that if the subterranean lair of the Hated Mother can be located, she can be killed and the land thereby restored to a forgotten state of purity.

The Dark Delvers maintain fortresses and fastnesses throughout the mountain ranges of the Land of the Mists. Most of these structures predate the Dark Delvers adopting them as headquarters—they seemed to be waiting for the Delvers’ arrival, complete with inexplicable labyrinths winding down into the abyssal depths beneath them.

To keep knowledge of the Hated Mother from spreading among the uninitiated, the Dark Delvers have created their own secret language known as the Mother’s Tongue. The Dark Delvers use this invented language to safeguard their findings from prying eyes and to inscribe markers left behind in their underground explorations to guide fellow members of their secret society.

The mystics of the Eternal Order belong to a cult that venerates a patchwork pantheon of deities borrowed from other religions. All of the gods they venerate, such as Vecna, Myrkul, Jergal, Vol, and Nerull, are associated with death. Members of the Eternal Order believe that undeath represents a transcendence of mortal frailty and willingly serve powerful undead entities in hopes of learning necromantic rites, such as the rituals of lichdom, that would allow them to become undead creatures.

The Fraternity of Shadows is a secret society of wizards who operate throughout the Land of the Mists. Contrary to the name of their organization, the Fraternity admits both men and women into their ranks, though this was not always the case. Members of the Fraternity of Shadows recognize each other by the silver rings, fashioned in the shape of two intertwining asps, worn by those who have been admitted into the cabal.

Although the wizards of the Fraternity seek to master many kinds of magic, they have an especial interest in illusions. Their study of the illusionist’s art has led them to the realization that the Land of the Mists is itself a construct, an unreal nightmare where fiction has been given a strange half-life in order to torment the Darklords trapped therein. The wizards of the Fraternity of Shadows hope to learn enough about the land’s true nature to wrest control of it from the Dark Powers.

The Ildi’Thaan present themselves as a society of like-minded individuals who share an interest in unlocking the potential of their minds. In particular, they seek to awaken and sharpen their psionic powers. As members of the Ildi’Thaan progress toward harnessing their psionic power, they find themselves visited by terrifying nightmares. These dreams are initially surreal and phantasmagorical in tone, but as they become more intense they impart an underlying urge—each member of the Ildi’Thaan finds themselves called to the strange land of Bluetspur, where the mind flayers promise to reveal untold secrets of the psionic arts in return for aid in discovering lost tomes of ancient prophecy known as the Thirteen Texts of Thaan.

Viktra Mordenheim tends to either destroy or cast out any experimental constructs who do not meet her exacting expectations—a common enough occurrence, since none of her creations have managed to equal or surpass her beloved Elise. Although most of her surviving creations wander away into the wastes of Lamordia to live as solitary brutes, some eventually awaken to new or forgotten intelligence and become reasoning beings all too aware that their creator has abandoned them as unfit and unworthy.

A few of the sentient and intelligent constructs that Viktra has crafted have banded together into a coterie obsessed with their creator’s work. Naming themselves Viktra’s Children, these constructs work in concert to discover the processes of animation for themselves so that they might reproduce their kind through scientific means.