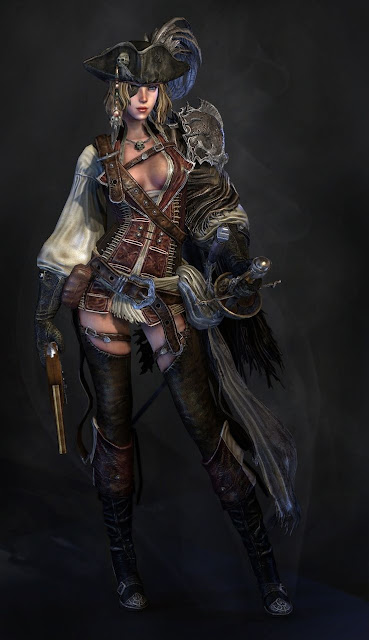 By using the magical lenses, Herman was able to see that he and Kahl were not alone below deck; three more pale-skinned women, marked by signs of deviltry, were approaching the makeshift chapel slow...until they began to run. Kahl left the room to meet them, destroying one of them outright by calling upon the sacred radiance of his deity. Kahl stepped back inside the chapel to shield himself from the onslaught of the remaining two, which seemed to reveal something important about the ship's chapel: its sanctity seemed to repel these fell beings (1).

Since our heroes were now trapped-but-safe inside the chapel and the monsters had no way to get at them, a brief parlay occurred. This conversation revealed much: these scarred women were indeed members of the Daughters of the Eel cult; they served some dark master trapped beneath the waves (2); they had killed the warden and all his prisoners. They offered a deal: hand the lenses over and Kahl and Herman could leave the ship in safety. Of course, Herman and Kahl declined this offer; furious, the two remaining Daughters of the Eel retreated into the shadows, where even the lenses could not detect them.

Herman and Kahl had to get off the ship one way or another. After some deliberation, they cautious made their way to the stairs. Everything was deathly silent, only the waves lapping against the hull and the creaking of the ship's timber could be heard. Up the stairs, then, and into the cold night air. Nothing stirred above deck.

They made it over the side and into Petrus's waiting rowboat, and began to head back to shore. Then they heard two tell-tale splashes behind them as the Daughters of the Eel dove in to pursue them. Using the blue lenses, Herman was able to target one of the Daughters with enchantment-empowered mockery, which sent her plummeting into the depths of the abyss (3). The last Daughter seemed to have disappeared from sight, but when the trio felt something knocking into their boat from beneath they realized that she was preparing to overturn their boat into the sea and pick them off at her leisure.

A knock from below again. Hands creeping up the side of the boat to rock it upon the waves and then disappear again into the inky blackness. And then, a pale hand rupturing the boat from beneath! Petrus rowed desperately for the shore, Kahl began to bale water from the boat with him helm, and Herman attempted to fend off the Daughter. After a tense struggle, the Daughter was dispatched, but by using the lenses Herman could see that many, many more Daughters clung to the hull of the Harrow beneath the waves.

Although their boat was ruptured, Petrus managed to bring it ashore. Making their way back to the Rended Ewe, the pair were ushered upstairs where they thought they would be handing the lenses over to Gentleman Jim, but instead a woman with long red hair and battleproud scars, and weathered leather, stood gazing out the window at the sea. The duo were now face-to-face with Vanessa Redmayne (4). gesturing for Herman and Kahl to sit, she thanked them for retrieving the lenses and listened to their report of the unholy events surrounding the Harrow. She added a generous bonus to their wages, and commented that with skill in dealing with the unusual had made them strong candidates for further work of this nature, should they be interested...

(1) - They had come on board to seek the lenses as well but could not reach them within the chapel. This unexpected place of worship had effectively held them at bay; they had allowed Kahl and Herman into the ship in hopes that the pair could be terrified into handing the lenses over to them.

(2) - One player surmised that this was a Cthulhu pastiche, but oh ho ho, Dear Reader, I have something inspired by Moby-Dick in mind instead. More will be revealed in further adventures; expect the Daughters of the Eel to factor into events that will develop.

(3) - I have to admit that I'm still struggling a bit with making encounters that are challenging enough in 5e, as the characters have some pretty strong firepower at their disposal. I don't think anything is "broken" with the game, I just think I'm still learning the ropes of it. Having to adjust to a smaller party of adventures than I expected probably didn't help any.

(4) - The party is now getting a sense of the power structure in place in Blighter's Manse:

Burgomaster
(whose name hasn't been spoken yet, but it would be easy to ask any resident)
|
|
Vanessa Redmayne
(the burgomaster's right-hand; she captains one of his vessels and is clearly the "muscle" of the operation)
|
|
Gentlemen Jim
(he handles the "business" end of things)

Since the party has had positive dealings with Jim and Vanessa, word of their prowess is likely to filter up the chain; the burgomaster might be requesting to meet with these new hired hands in person...
Posted by Jack Guignol at 12:07 AM