Playing Card Initiative in MY Retro-Clone? 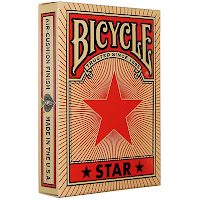 It's more likely than you think.

One of the things I like best about Savage Worlds (and want to import to other systems where possible) is the use of playing cards for initiative. When using individual dice rolls for initiative sometimes it’s hard to see who rolled what from across the table; playing cards have the advantage of being big and bright enough to make initiative order readily apparent.

Players then arrange their cards highest to lowest; high card goes first, and everyone follows in descending order. Alternately, if a player would rather take their turn on a lower value card than their highest, that’s okay too.

In the case of a tie, break it in alphabetical order of the suits: Clubs beats Diamonds beats Hearts beats Spades.

What about that Joker? A player who gets the Joker on their turn can act whenever they want in initiative order and gets to re-roll any one roll during the round. Fortune favors fools. 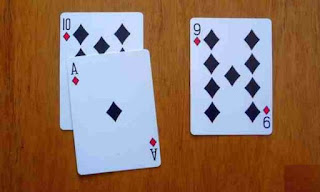 For foes controlled by the GM, instead of dealing cards for each enemy, deal them into groups based on their types. For example, if the GM has 4 Mud Ghouls (initiative bonus +1) and their leader Morgash of Tarr (initiative bonus +0) in the fray, the GM’s initiative cards would look like this:

I recommend having two shuffled decks on hand with different backs; that way if you run out of cards you don’t have to stop and shuffle...just break out the other deck and keep going. Sort out the cards after the game, or have a player shuffle the deck you ran through after they’ve taken their turn.
Posted by Jack Guignol at 12:01 AM