The Last Apprentice and 5e D&D 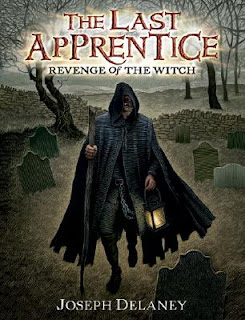 Joseph Delaney’s The Last Apprentice is a cracking series of books. (It’s also called the Wardstone Chronicles in the United Kingdom.)

Although something of a lonely outcast, a Spook is entrusted with dealing with the witches, boggarts, and ghosts that make mischief (and worse) in the area they’re sworn to protect. Armed with folkloric knowledge, bladed staves, a bit of the second sight, and a silver chain, Spooks are the common man’s protector against the forces of the Dark.

Though the books are intended for an audience of young readers, the writing is brisk enough for an adult to enjoy as they breeze through the volumes. The characters are compelling enough to hold interest, without being overly cloying or naive.

The books have great chapter illustrations done by Patrick Arrasmith. I mean, just look at this: 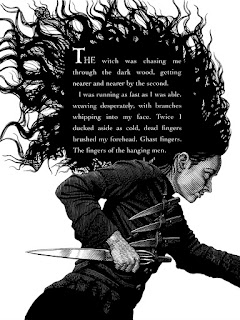 The way that British folklore has been woven into the books is subtle, but also sometimes unnerving. Some of the elder witches are quite monstrous. You wouldn’t want to find this in the your attic: 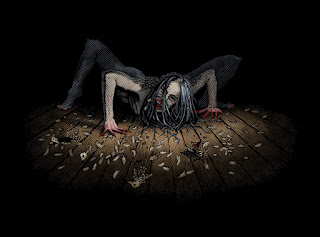 If you’re looking for a darker point of inspiration for a campaign about novice adventurers, the Last Apprentice novels would be the perfect starting place for young adventurers being trained-up to the task of protecting their village from evil. It would be a good fit for 5e D&D characters at the early levels, say 1-3 with 3rd level being their "graduation" into junior Geisters.

As an example from my own Krevborna campaign setting, the characters would all be apprentices or agents of Mad Meg, the local Geister, an aging woman who was once an adventurer in service to the county of Lychwyck-supra-Mare, but who now finds that the years weigh too heavily upon her–age makes it impossible for her to fulfill her duties.

The characters would receive guidance from the Geister, but would also be expected to investigate and solve problems involving the supernatural in her stead. In their downtime, they would make their home at the Geisterhaus, and have access to its amazing library of occult lore.

Another gameable item: there's a lot in these books that helps situate what character classes look like in a setting based more on folklore than fantasy.

If you want a cool model of how the relationship between a warlock and their patron might go down, check out Alice and the Bane in Curse of the Bane. Damn. If you want a model of how a pact can go horribly wrong, check out what happens when Morgan tries to obtain power from the "winter god" Golgoth.

One way to envision the 5e ranger is to think of them like the Spooks in Joseph Delaney’s The Last Apprentice books: