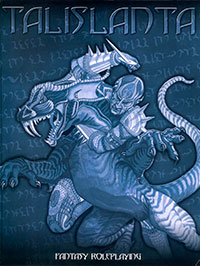 My friends and I played a bit of Talislanta in high school, but it proved to be a difficult setting to get across to my peers at the time. It was too weird, too alien, too unlike the usual mash-up of Lord of the Rings and Conan that fantasy usually fell back on. The fourth edition of Talislanta's core book advises you to pick one general area to start out with, focusing on that slice of the setting and building outward once you're comfortable with it. Either the edition I had never mentioned that or I missed it or the idea of only using one smaller area of the massive campaign world never occurred to me because in practice it was a nightmare trying to convey this unique setting as a teenager to other teenagers.


Rereading the fourth edition made me realize where I should have started when trying to run a Talislanta game. What immediately caught my a‚ttention was the description of the Western Lands: "Opposing religious factions, witch hunters, and secret cults make this a good starting place for local-scale campaigns based on intrigue and subterfuge" (430). 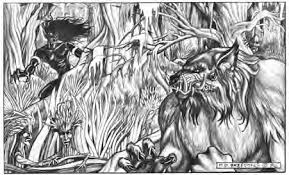 Hold up. Religious factions? Witch hunters? Secrets cults? This sounds downright Gothic to me! Cue to me flipping to the larger detailing of the Western Lands. The High Orthodoxy of Aaman, with its inquisitors, monastic orders, and templars, would make a dandy stand-in for the Gothic’s vision of the Catholic Church; Necron, City of the Dead, is haunted by necrophages (read: ghouls) and ghasts (liches); the Sarista of Silvanus are literal gypsy analogs; the Dhuna of the Witchwood have enough wiggle-room in their occult orders to be either kindly druids preserving the lost ways of an Old Faith or Wicker Man-style evil pagans; the Werewood is home to banes (vampires) and werebeasts; the Zandir work as a decadent, corrupt culture; etc.

I think if I had scaled down the setting to focus on Talislanta as a Gothic Fantasy game set in its Western Lands I would have had more success getting the game going. I certainly would have had a better idea about what to do with it.
Posted by Jack Guignol at 12:39 AM