Misery and Gain Have Their Own Staccato Rhythm 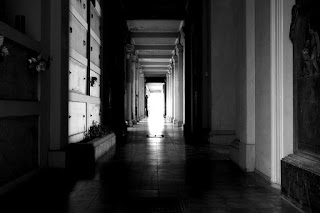 Events: The gang tracked Doctor Nymenholt to the medical clinic he runs in the Chandler's District. Zanna posed as a patient needing an examination; Nina came with her playing the part of a concerned friend. The rest of the group sidled around to the back of the clinic to enter surreptitiously through a window. Unfortunately, the break in went wrong from the start--Raymondo, Hitoshi, and Grumli made too much noise breaking and entering and were promptly attacked by nurses who turned out to be more than medical personnel--nurses generally don't cast spells that make the walls bleed and cause slashing claws to form out of the ether.

Meanwhile, alerted to the intrusion, the nurse who was attending Zanna in an examination room turned on her, slicing at her with a scalpel. Nina, reading a broadsheet in the waiting room, failed to hear the melee until it was too late...Zanna stumbled out of the examination room only to crash to the floor in front of Nina, dead. 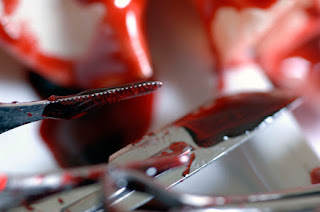 And that's where we took a break so Zanna's player could make a new character.

The game resumed with the gang's sorcerer falling dead at Nina's feet. Now alone and besieged by a murderous, magically proficient "nurse," Nina fought for her life--and won. Upon examining the corpse of the nurse, Nina discovered that the woman bore the Adversary's mark. It was now apparent that the Church of the Outlander had enlisted the Excuciata in a war between two cults as the condition of their alliance--the Church of the Outlander were hoping that the gang could take out their occult rivals.

Nina fled deeper into the Nymenholt Clinic to find the rest of the Excruciata. She discovered them in a pitched battle with other members of the clinic-cult. After dispatching the "nurses" the gang debated whether to press on with their mission to assassinate Doctor Nymenholt or bail in light of Zanna's untimely death. Misery and gain have their own staccato rhythm; the remaining members of the Excruciata decided to press on and take blood for blood.

As they explored the now shockingly silent clinic, they discovered a patient--a goliath musician name Wexel--hiding in a janitor's closet. Wexel explained that he had come to the clinic hoping to beat his addiction to snowleaf, but had discovered that Doctor Nymenholt and his nurses were implanting the patients with unholy parasitic lifeforms. He had tried to make his escape during the chaos of the Excruciata's entrance into the clinic, but he hid in the closet when he saw the doctor appear suddenly and take the elevator down into the basement.

Wexel decided that there was safety in numbers. Grumli armed Wexel with a spare sword and he was duly deputized as an auxiliary member of the Excruciata. The gang quickly located the elevator that Nymenholt had been spotted entering, and took it down into the basement of the clinic.
Posted by Jack Guignol at 12:04 AM