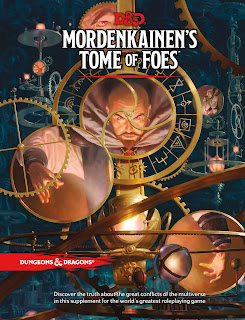 I opened Mordenkainen's Tome of Foes up randomly to the chapter about dwarves, so that's where we're starting. In general, I find dwarves to be a pretty uninteresting Tolkienism in D&D. But there is some cool stuff here:

We get details on the duergar, who were originally a clan of dwarves influenced by the mind control powers of the illithids to abandon their usual dwarven nonsense and dig farther down than dwarves are wont to go. 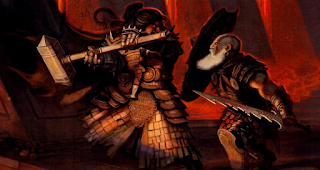 Once they got to Mindflayerville, they were promptly enslaved. Their escape from bondage came when they made a pact with Asmodeus, promising to fight against Lolth's drow.

This means that duergar are fucked up in multiple ways: the mind flayers experimented on them because dwarves are hardy and resist poisons (so they're probably mutated in fun ways *edit* yep, we get stats for derro in the bestiary section and they are the experimented-upon duergar) and they were probably changed by a literal devil's bargain (so they're spiritually and physically corrupt in fun ways that sets them apart from the Gimli clones).When they got back to their dwarven brethren, they were written off as heretics. Pleas of "But bros, fuckin' mind control" fell on deaf ears. But here's the thing: the duergar are actually right. In a world where de facto agency-stripping Charm Person spells are possible, it feels kinda gross to blame the victim.Long story short, the duergar pull a "Better to reign in hell than serve in heaven" (they literally want to kill Dwarf God and take his throne) resulting in a guerrilla war that doesn't accomplish anything for either side. The rest of the world doesn't really know the scope of the conflict, and maybe dwarves keep it that way because The Petty War is probably pretty embarrassing, just like Edition Wars are on gaming forums.Campaign seed that occurs to me: a party of duergar hell-bent on finding proof that the mind flayers bent them to their will in hopes of reuniting the dwarven people and calling off their dumb war.

Anyway. Reading more about dwarven natures makes me realize why I've never been that into them: 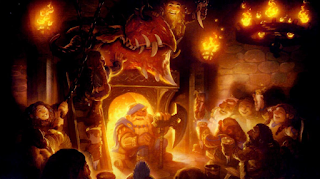 Did you know that drunkeness affects dwarves differently?
When in the presence of their comrades, beer evokes communal memories. When a dwarf drinks alone it sends them into a depression spiral of loneliness. (As Anne pointed out, this isn't actually that different from how alcohol works on people in the real world.) When duergar drink too much they have ptsd visions of being tortured by mind flayers, so they don't drink much, understandably.

Did you know that Gruumsh, god of the orcs, operates a tip-line? He lets the orcs know when dwarven fortresses are at their weakest and open to raids. OMG the duergar do that "assigned mates" thing that incels are into. Of cooooourse they do. All the pieces are falling into place.
Posted by Jack Guignol at 12:02 AM