A Deluge of Dark Sun 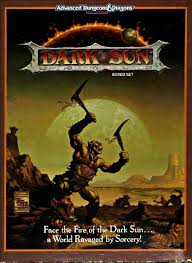 The Dark Sun setting was one of the great creative triumphs of the 2e AD&D era. It was the prefect marriage of content and aesthetic expression--the writers lined up the rules and made strategic interventions into what D&D could be and the artists followed through and made it come alive. Dark Sun also seems to spring eternal: it was one of the few settings to see support during the 4e era, and people have been asking for its return since 5e dropped. It has certainly been a major point of inspiration for my Cinderheim setting. Here's some Dark Sun-related stuff from the internet worth your time: 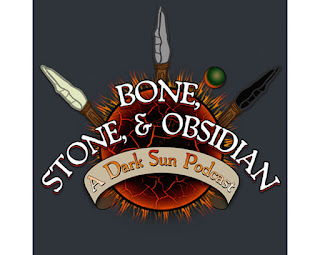 Bone, Stone, & Obsidian: A Dark Sun Podcast
Dark Sun enthusiasts discussing the setting in what I hope will prove to be a long-running series of podcast episodes.

Land Between Two Rivers
Jim Davis from Web DM has started a new streamed D&D campaign called Land Between Two Rives that is heavily Dark Sun influenced--a great example of taking the setting's themes in new directions. Plus, I love how oddball and different the cast of characters are from the "only Tolkien races" or "humans only" campaigns out there; this one's got a goblin cleric, a tiefling bard, a lizardfolk ranger, a bugbear druid, and a human (created by magic because humans are extinct) barbarian. 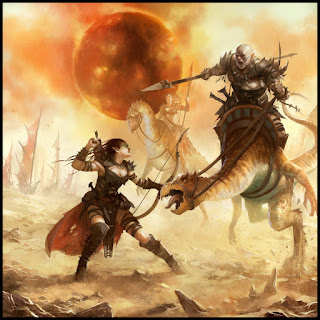 Web DM Podcast about Dark Sun with saevrick
The Web DM show also did a podcast episode on the Dark Sun setting and what they love about it.