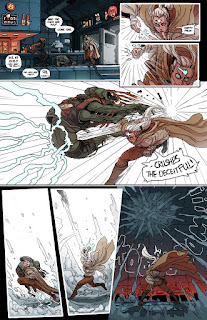 I often hear comic fans lamenting that "there are no good comics anymore." I can see their point, somewhat. Frankly, I find a lot of what seems popular in the world of comics to be uninteresting and shoddily done.

On the other hand: man...I can't even keep up with all the stuff I want to read, and I'm not even a single-issue kind of guy. I mean, look at that image over to the left. That's the good shit. Thanks to the internet there is a preponderance of the good shit just about everywhere you turn.

It is likely that you do not share my taste in comics. That's fine. But if you're open-minded and can't find good comics to read along the narrow band of popular interest let me make some recommendations:

And that's just the stuff that's still ongoing. There's a couple things I want to mention that finished their runs in recent memory:
Posted by Jack Guignol at 12:01 AM