A Song of Heroes, Past and Present 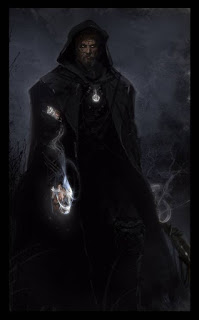 A Song of Heroes, Past and Present
Our online D&D game set in Ravenloft continues.

Events
The weather grew colder as the party ventured into Lamordia. Snow began to fall gently, settling on the bare limbs of trees and blanketing the roads that led north. Bela Drachen had been withdrawn and mostly silent as they traveled; he seemed lost in worry over his sister’s accursed state. Emilia remained catatonic. However, there was one sign of activity: something within her belly moved, wriggling just below the line of her flesh like a caught eel.

The party stopped to ask for directions to Leonora Vos's house at The Coxcomb, a small-but-cozy wayside inn. Inside, the proprietor stood behind the bar, chatting to two farmers. A bard, a young woman dressed in a stylish approximation of jester's motley, sat on a stool near the fireplace, strumming a lyre. The only occupied table had four figures seated around it: a grizzled man, gray of hair and beard; a feral-looking woman in furs; a woman with dark, curly hair and a gold chain extending from her ear to her nose; a man with a militaristic haircut clad in black robes.

Tekla chatted to the innkeeper. Eyeing the weaponry the party was carrying, he stammered, "Please, don't start any trouble here. Just...just don't kill anyone." After assuring him that no blood would be spilled on premises, Tekla convinced him to draw them a map that would take them the rest of the way to Leonora Vos's home.

The bard began to sing a ballad in a clear, sorrowful voice while plucking the strings of her lyre. The first verse concerned a group of five unlikely heroes who banded together to prevent a monstrous child from being born under an apocalyptic prophecy. One of the heroes was a mighty orc warrior; although reviled because of their orcish blood, they were unfailingly brave and valorous. Another of the heroes was a feline trickster, cunning and clever, always able to squirm their way out of a scrape. And then there was a witch of the Vardegan clan, wise in the ways of the arcane and a staunch defender of the natural world. Yet another of the heroes was small in stature, but large in heroic deeds--she noticed things that other could not. The last verse told of the betrayal wrought by the last of the heroes: a drow matriarch whose faith in the goddess of life masked a deeper devotion to Lolth, the Queen of the Demonweb pits. This last hero forestalled victory; through her machinations, she managed to delay the birth of the apocalyptic child until a time more advantageous to Lolth instead of lifting the curse as the group had planned.

The content of the ballad was another strange echo that resembled the individuals assembled in the party, though inexactly, much like the group portrait that had been painted by Donna Pietra Sangino. Al' was also troubled by the last verse, which made him question whether the religion that had been passed down through his family was only a mask that hid devotion to Lolth. The tarokka reading he had been given did mention a crisis of faith and betrayal, after all.

13 Shattered Mirrors approached the bard after her performance, and she introduced herself as Cassie DuVal. When asked about the provenance of the ballad, she explained that the subject was an ancient tale, passed down through the generations, and that there are others like it in throughout the land that told tales of evil that was never quite vanquished--the tragedy of unfinished business. “That’s how it is, isn’t it?" she said, "We're all just living amongst the debris of the failures of past generations.” 13 Shattered Mirrors couldn't help up agree.

Figuring the seated group for a party of mercenaries, Tank approached them for some soldierly camaraderie with Gnargar in tow. The man in the black robes produced a folded piece of paper and showed it to the man with the gray hair and beard. The man put the paper face up on the table and threw a pair of manacles beside it. The paper was a wanted poster from Ghastria with drawings of Tank, Gnargar, 13 Shattered Mirrors, Tekla, and Al'. It offered five hundred gold pieces for each of them, dead or alive! "Well, looks like we found ourselves a nice, fat bounty," the grizzled man said as he drew a scimitar and a dagger.

Despite his eagerness to apprehend the party, the bounty hunters' leader spent almost the entirety of the fight paralyzed by a hold person spell until he was cut down. The feral woman was another story; despite fighting with a ferocity that left her open to counterattack, she dealt horrific wounds with her two-handed cleaver and withstood quite a few injuries herself. The dark haired woman charged at 13 Shattered Mirrors, keeping him pinned down at the bar. The man in the black robes cut himself with a razor to summon a scythe made of his own wretched blood.

The party was ultimately triumphant; the bounty hunters lay dead on the floor of the inn's common room. Suddenly, the door of the Coxcomb blew open, and a figure clad in a hooded black robe entered. His face was entirely obscured by his hood. He floated slightly above the ground as if the very act of walking was beneath him. He spoke to the innkeeper: “Ah, another fine harvest. Pleasure doing business with you.” With that, coins began to spill from his black sleeve onto the bar. More hooded figured entered and began to drag the corpses of the bounty hunters to a waiting cart outside.

When this strange interloper had departed, the innkeeper was asked to explain what had just happened. He claimed that when he bought the inn he had also unwittingly inherited a bargain: anyone who died through violence in the inn would be claimed by that strange figure--a being known as Kalarel the Vile. Tekla was certain that the bodies he collected were being used for some unwholesome ritual purpose. 13 Shattered Mirrors asked Cassie if she would like to accompany them on their adventures. She asked if this kind of thing--random attacks by mercenaries, followed by the intercession of icy-voiced, floating magi--was usual for them. When they were forced to concede that it was, her answer was clear: "Hell no."
Posted by Jack Guignol at 11:57 PM