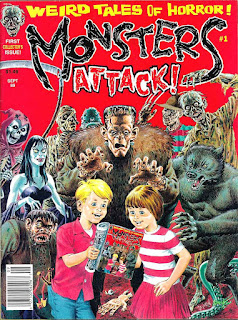 Monsters Attack! was a short-lived, magazine-sized comic put together by Mort Todd, the then-editor of Cracked magazine. Each issue features a number of horror comics, as well as articles about horror movies and all things gruesome. I got my hands on the first issue when it debuted, but the pharmacy I bought it from never seemed to get the following numbers. Now that I have a copy of the Monsters Attack! Ultimate Collection, I plan to go through the series' five-issue run and briefly review the comic content from each issue. Let's start with the contents of the first issue. 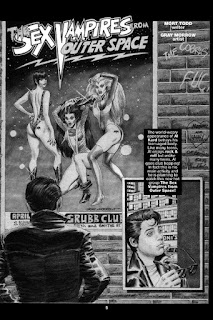 "The Sex Vampires From Out of Space"

A hot new band, comprised of three vampy sex kittens, is tearing up the charts while a killer (or killers!!!) who exsanguinate their victims is on the loose. Coincidence? Well, our main character, a teenage rockabilly rebel with a nightlife addiction, aims to find out. When he finally barges into the Sex Vampires' dressing room, he's dismayed to find that they are a bunch of Alice Coopers--their whole act is just for the stage, they aren't undead at all! He soon quashes his disappointment by drinking their blood because he is, in fact, a vampire!

Re-reading this one, there are strange details in the art that caught my eye that I definitely didn't notice as a teen reading this. Although the story is set in the modern moment (the Sex Vampires are noted to be a "speed metal" band), many of the background characters look like they belong to a much earlier era. Besides the James Dean look of the main character (which is plausible, there's always a rockabilly guy within a ten mile radius), the concert goers look like they're housewives from the 50s or 60s and the venue security is a goon in a suit with a bowtie. Weird choices!

"A Monster for All Seasons"

Story and art by Pat Boyette

A lonely mage in "medieval times" is befriended by a little monster of explained origins. Although he's afraid of the creature at first, the mage comes to value the monster as a companion who helps alleviate the loneliness that has marred his life since the death of his wife. Unfortunately, the monster is carted off by an aristocrat who finds its antics amusing, but the noble's abusive personality causes the little beast to go on a justifiable murder spree. The ending of this one is a great example of the macabre shocks that comics in this vein were known for: as a parting "gift," the monster digs up the moldering corpse of the mage's wife so that he won't be lonely anymore!

"Return of the Golem"

It's Kristalnacht, and the Nazis are destroying Jewish homes and businesses. A Jewish artist finds refuge in a kindly German's basement; he uses the raw materials found down in the depths to create a clay golem like that in the Czech legend. Predictably, the golem goes on a Nazi-slaying rampage. The end has a nice sequence where a Nazi commander smudges the Hebrew inscription on the golem's forehead, returning it to inert clay; however, as it reverts to base matter, the golem's clay smothers and suffocates the Nazi.

In retrospect, I think this story is actually a pretty important part of my personal history. Not only was this the first time I became acquainted with the legend of the golem, this is also the first mention I had ever stumbled across of the Nazi program against "degenerate art." They certainly didn't teach us about that in school. See, mom? Comics can learn ya something.

This one is more of an illustrated story than a comic. A down on his luck writer gets shanghaied by a mad scientist; his brain is put into the body of the usual patchwork of dead flesh and granted a new lease on life. This tale definitely feels like Mort Todd working out some anxieties and frustrations about being a writer in a world that doesn't value his skill set.

"Frankenstein 1990" was supposed to be a series, but this is the only installment of it that was ever produced. Apparently the magazine's readership wasn't too excited by it, which makes sense. To be honest, there isn't much going on in "Frankenstein 1990"! Maybe it could have developed into something interesting in time, but this single installment doesn't show much promise. 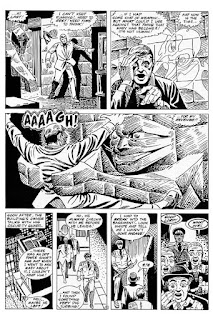 A scheming jerk turns some nebulous and undefined "scientific equipment" on a brilliant researcher, inadvertently transforming him into a architectural nightmare. This is a slight story, but the punchline is a nice full page bit of gruesomeness. This story is definitely an excuse for Ditko to do wheelies in the parking lot; he really gives the monster everything he's got.

This one was my favorite story when I first read the mag, and it remains my favorite now. Although no explanation is given about the "cause" of the monstrosity in this tale, the idea of a French-Canadian logger whose beard drinks up all manner of "fuel" (sap, gasoline, and blood) is a pretty uncanny image. Also, there are nice visual touches to show how unstoppable and relentless he his: there's an axe buried in his body and his forehead bears the scar of a chainsaw blade having snapped with its whirling teeth had been liberally applied to his skull. "Weirdbeard" also features a great little shocker panel as part of its climax. Ca c'est bon!