Beyond the Wall and Other Adventures (part 4) 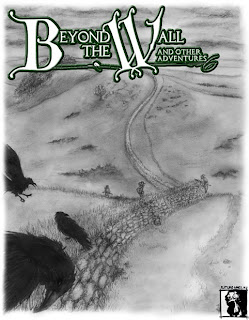 First part of the review.

Second part of the review.

Third part of the review.

The bestiary section of Beyond the Wall is short, functional, and offers no real surprises.  The standard fantasy creatures are covered: goblins, ogres, cockatrices, worgs, etc.  That said, the descriptions of even these standard creatures have the same quality of brief-but-evocative flavor found in the magic section.  For example, we're told that Wights "are the spirits of long dead kings, found wandering their barrows and the surrounding lands."  Similarly, Wraiths aren't simply ghostly undead but rather are "incorporeal spirits trapped between this world and the next, caught in agony between worlds and hungry to spread their pain. Plants wither as they pass, and any creature touched by a wraith’s icy presence loses its personality and will."  Certainly not ground-breaking stuff, but definitely just enough flavor to make the description interesting and inspiring to read.

I'm also rather enamored of the minimalist statblocks for all the creatures in the bestiary.  For example, even a mighty Demon of Vengeance is presented elegantly:

Hit Dice: 20d10 (110 HP)
AC: 24
Attack: +24 to hit, 1d6 + 20 damage (stick)
Alignment: Chaotic
XP: 17,300
Notes: Great Strength (Dom Ilska’s attacks do extra damage, included in the profile above), Invulnerable (may only be hit by magical attacks), Magic Resistance (Dom Ilska has a 30% chance to resist magic), Swift (Dom Ilska gains a number of attacks equal to the number of opponents in close range of him, up to a maximum of three attacks), Unholy reflexes (Dom Ilska has a bonus to hit, included in the profile above).

Of course, part of the stated purpose of Beyond the Wall is to be able to get a game on the table with a minimum of preparation.  To that end, the game comes with a sample Scenario Pack that is very much a DM-facing analog to the players' playbooks.  The featured adventure is called "The Hidden Cult," and it offers a variety of random tables that allow a DM to roll-up an adventure pretty much on the fly.  This first bit of the Scenario Pack is meant to be used while the characters are generated; you grab the locations and people connected to the characters and plug them into tables of who has betrayed the characters and who/what the evil cult desperately wants to get a hold of.

Further random tables generate the cult's purpose as well as the cult's leader.  There are other tables to generate a "dungeon" (not necessarily an actual dungeon) associated with the adventure.  However, these dungeon tables are not the sort of random-stocking tables old-school players may be used to; rather, they suggest the nature of the dungeon's guardian and what final challenge it poses.  Additional tables detail what hints might be available as to the nature of the cult, as well as what red herrings might throw the characters off the scent.  The Scenario Pack is rounded-out by tables of "recent events" and tables geared to push the characters into action.  All in all, this seems like it would quickly generate the skeleton of an adventure that could easily take multiple seasons to complete.  If you want to make a campaign of it, you're on your own after that, of course.

I want to return to the two stated purposes of Beyond the Wall.  One is to provide a game that veteran players could grab and play with a minimum of preparation.  Beyond the Wall easily accomplishes that.  Players could grab Playbooks while the DM grabs a Scenario Pack, and I imagine they could be ready to go with new characters and enough adventure to hit the table in 20 minutes.

Of course, if Beyond the Wall is to be a series of one-shots there's going to be a need for many more Scenario Packs.  Also, frankly, the characters generated by the playbooks are so interesting that it would be a shame to abandon them after a single adventure.

The other stated purpose of the game is to be a smooth entry point for new players.  This is where I think Beyond the Wall wildly exceeds its goal.  I feel confident in saying this: Beyond the Wall is the best introductory game based on classic fantasy RPG rules I've ever encountered.

Beyond the Wall has replaced Labyrinth Lord as my go-to D&D game.  I think this is the finest new game I've seen in ages, even if its roots stretch far back into the genesis of the hobby.  I definitely recommend giving this game a chance if its premise appeals to you.

The game can be found here in PDF and print.

If you'd like to add elves, dwarves, and halfling Playbooks into the mix, there are freely available as a set here.

If you'd like to tell a story of courtly intrigue and the nobility, there are freely available Playbooks for that here.

If you'd like another Scenario Pack to fool around with, check out the freely available Goblin Infestation here.
Posted by Jack Guignol at 2:14 AM