A Giant is an Accumulation of Ambitions 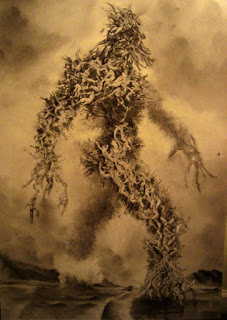 Events: The Excruciata tracked Doctor Nymenholt down into the basement of the clinic, where they discovered a hellish industrial laboratory. Unfathomable machines spit galvanic arclight across a field of corpses on metal tables--a horrific charnel factory. Nymenholt was ready for the group; behind him stood a giant whose body was stitched together, obscene.

Nymenholt cackled madly, and spoke: "Do you know what a giant really is? A giant is nothing less than an accumulation of smaller men's ambitions." Nymenholt waved his hands, gesticulating wildly to the giant that lumbered and glowered behind him. Then, the Excruciata saw it as it really was, and Nymenholt was right: the giant was not just a monstrosity of flesh, bone, and hate; it was revealed to be comprised of men and women, harnessed together with sutures and hellish surgery to form something larger than each minuscule individual, their bodies thrashing together with the syrupy sick sound of sweat-coated skin striving against other sweat-coated skin.

The amalgamate giant charged the party. Grumli, Hiroshi, and Wexel met the charge and engaged the giant in melee, while Raymondo and Nina attempted to cross the laboratory to get to Nymenholt. The giant hit like an avalanche, its fists pummeling the crew. Nina and Raymondo's sprint toward Nymenholt was halted by the rise of the corpses laid out on the metal tables.

Nina became a whirling engine of destruction, taking down zombie after zombie. Raymondo tried to break away from the horde to reach Nymenholt, but was felled by the monsters he was trying to evade. By the time Nina fought her way to him, Raymondo had been torn apart by the zombies. Nina began to climb the room's uncanny machinery to get out of the reach of the things, all the while throwing bolts of radiance at Nymenholt as he struggled to find cover.

Meanwhile, Hiroshi, Wexel, and Grumli were slugging it out with the giant. Grumli was knocked prone by the giant's meaty fist, and then he was trampled underneath its feet--crushing him utterly despite his barbaric dwarven resilience. Moments later, Wexel cut the thing asunder, spilling the bloodied bodies that made up its bulk like ropes of offal falling to the floor.

Hiroshi's bow put an end to the cowering Nymenholt, and his remaining animated dead were duly put to the sword. Down two long-standing members, the Excruciata ransacked the clinic quickly, locating Nymenholt's collection of spellbooks and occult tomes for their cultist allies.

Crime pays dividends in violence, and the Excruciata had held up their end of the bargain with the Church of the Outlander. They would have the magical backing they needed to go into the production of magical gunpowder for sale in the criminal underground.

Other installments in season one of this campaign:
Enter the Excruciata
Aboard a Blood-Hunting Ship
Rumble in the Urban Jungle
We Kidnapped Your Son, Sell Us Dragon Blood
The Dark of a Tavern in the Cemetery

Misery and Death Have Their Own Staccato Rhythm

Stay tuned for Season Two!
Posted by Jack Guignol at 12:00 AM