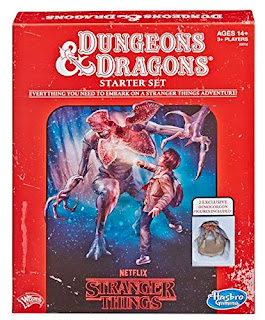 I have a pet peeve: I hate seeing squandered opportunities.

The idea of a Stranger Things-themed D&D starter set has a lot of potential. Although the product is arriving a little late in the Stranger Things hype cycle as the show heads into its third season, it at least makes sense as a tie-in; the kids on the show play D&D, so linking the two brands doesn't immediately feel like a cash-grab.

The Starter Set contains the following bits and pieces:


Overall, this is a squandered opportunity and I'm not sure what audience it's really aimed at. Stranger Things fans aren't going to find a lot of content directly related to the show. Anyone hoping to play in the Stranger Things universe is going to walk away empty-handed. Hardcore D&D fans aren't getting much new in this box. New or prospective D&D players are far better served by the original 5e Starter Set.

I generally think that critiques of WotC being "too corporate" are unfounded. (Just look at how small their actual team is, realize that they're always recruiting freelancers from across the hobby, etc.) But the Stranger Things Starter Set feels like the result of a crass marketing decision: brands are leveraged, but the actually offering is pretty hollow and slapdash.
Posted by Jack Guignol at 12:01 AM