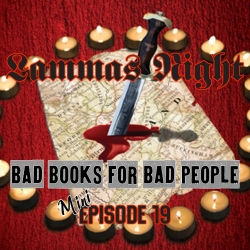 In this mini-episode, Kate occult-splains the 1983 novel Lammas Night by Katherine Kurtz to Jack. The book promises the tale of a coven of British witches that is all that stands between the UK and devastation at the hands of Hitler's black magicians. What it delivers is plentiful inter-coven politicking, intricate descriptions of British military dress, and in-depth descriptions of other people's tarot card readings.
Will there be enough grotty Nazi occult action to hold Kate's interest? Doesn't "cone of power" sound like a Pokemon attack move? How would Americans solve this scenario differently? The answers to all these questions and more exist within this mini-episode.
Posted by Jack Guignol at 12:01 AM